We All Start Somewhere 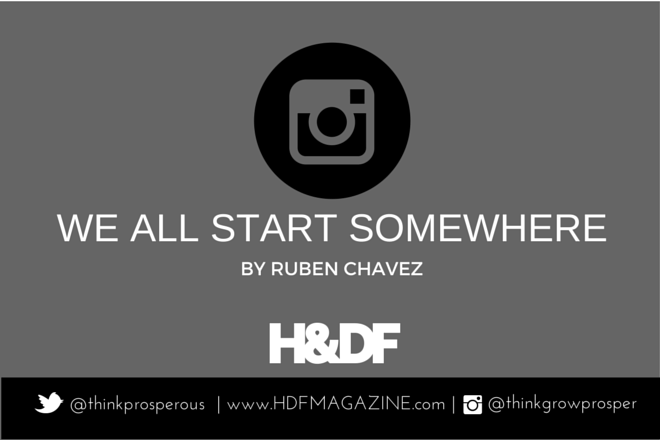 I wish I could tell you that I set out to build one of the largest inspirational quote accounts on Instagram from the beginning. But that would be a lie.

Funny thing is, the fact that I didn’t do that is a big reason why I’ve been able to build such a successful following.

An Entrepreneur by Today’s Standards

I am my own boss. I set my own schedule. I make my own money in ways that I choose.

By all accounts, I am an entrepreneur. But I never gave myself that label.

Actually, I take that back. there was a time in the beginning when I did consider myself an entrepreneur. But I was too busy obsessing over my business cards and fancy letterhead to be bothered with actually adding value to people’s lives and making a profit (neither of which I was doing at the time). That is the point of entrepreneurship, isn’t it?

The word entrepreneur gets tossed around a lot. To be honest, it’s like nails on a chalkboard to me. I use it mostly out of convenience and necessity.

But the word is outdated and no longer accurately describes what most people intend it to.

Today, it’s no longer necessary to invest thousands of dollars into a venture and hope it works out. You can start creating value on your own with an internet connection and an idea.

I also think the ‘E’ word makes the concept of working for yourself more intimidating than it needs to be. It builds it up too much.

Entrepreneurs are official. They have LLC’s and corporations and employees. They make tons of money and create innovative products that change the world.

Those are some pretty intimidating expectations, especially if you’re just starting out. Similar to house chores and homework, it’s hard to begin when you think you have too much to do.

We often forget that most big businesses started with just one or two people and an idea. And many times out of a garage or basement.

The Emergence of Creators

So what do we call these people? In the book Rework, Jason Fried and David Hansson use the word ‘starter’ in place of ‘entrepreneur.’ I like that. It takes the pressure off and it’s a reminder that the people who are commonly recognized as “entrepreneurs,” were once just starters. 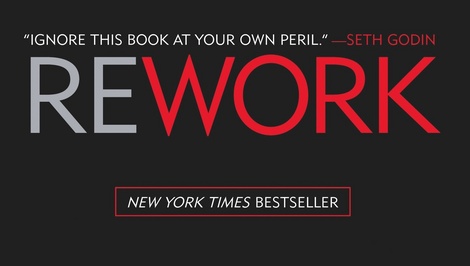 Amazon founder Jeff Bezos started selling books out of his garage. Bill Gates started writing software while he was in college. Steve Jobs started making computers and selling them out of his garage with a buddy. They all had humble beginnings. But they all started.

At the end of the day, if you’re not receiving a paycheck from a job, you’re going to need to create some kind of value in one way or another to generate income. You need to be a creator.

This article isn’t to sell you on being a creator or tell  you how much better it is than having a regular job. One is not better than the other. They are just different choices.

There are benefits to being an employee and getting a steady paycheck, but there are also drawbacks.

Same goes for being a creator. The truth is, society needs non-creators just as much as it needs creators.

My goal for this article is to make you understand that if you want to be a creator, it’s not as big of a deal as you may think.

Case in point: I don’t have an MBA (or any college degree for that matter). I don’t come from a family of business-minded people. I don’t even really consider myself an entrepreneur in the traditional sense. But I don’t have a boss and I make a comfortable six figure income, mostly from my iPhone.

But the way I’ve done it is by starting small and doing things that I actually like or that I’m attracted to. It sounds simple, but it took me a while to figure this formula out.

In 2008, after reading the 4-Hour Workweek by Tim Ferriss, I started a side business selling mannequins online. It started producing a decent income for me at the time and I thought it would be a good idea to quit my day job selling cars and go work for myself full time. 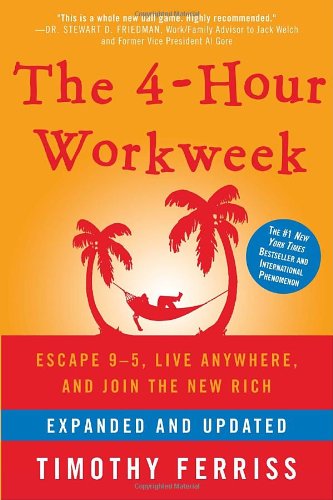 It was all rainbows and butterflies until I realized that I had zero interest in anything having to do with mannequins whatsoever. This led me to neglect updating my website and ordering system to remain competitive, which resulted in a decline in business.

So with no steady paycheck and sales from my primary income source dwindling, I decided to do what any self-respecting entrepreneur would do: Start an Instagram account.

At the time, I was rereading the classic success book, Think and Grow Rich. I had read it several times before but at this juncture in my life, I was resonating with many of the concepts on a deeper level.

For whatever reason, the idea of organizing my favorite quotes from the book into an Instagram account seemed attractive and fun. Don’t ask me why. What’s important is that I was excited about it.

Making quote graphics that inspired me brought me some joy during a particularly challenging time in my life. 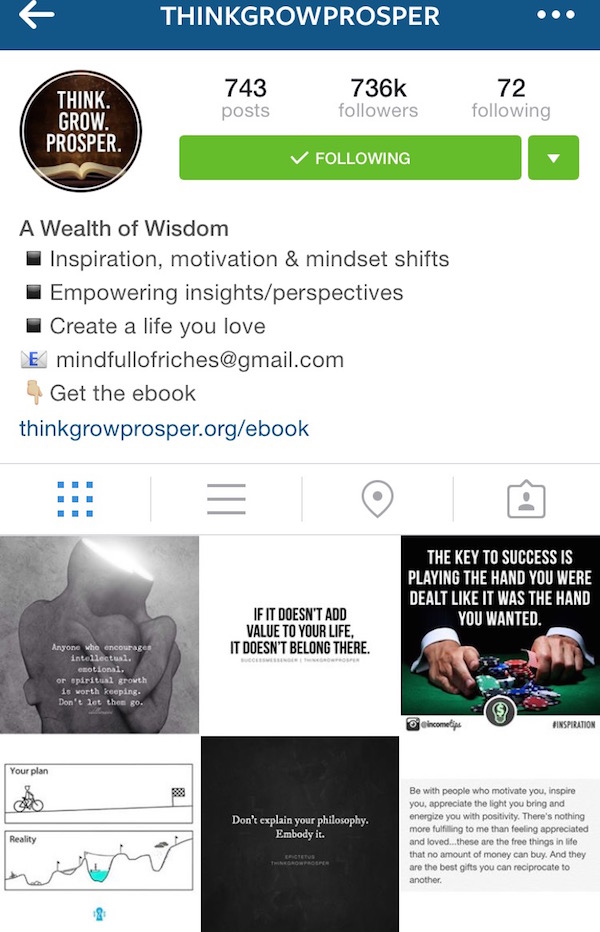 So I kept doing it.

And then something I didn’t expect to happen, happened. People started noticing. Other users liked what I was doing and started following me and commenting with positive feedback.

In turn, these people shared it with their friends and engaged with my posts. Social media is funny like that.

The Moral of the Story

Now, two Instagram accounts and over a million combined followers later, I still can’t believe that so many people resonate with the quotes I post. It’s super exciting to me to be able to share this kind of content on such a large scale.

It’s also given me the opportunity to partner with other online brands and Instagram accounts to help them grow their businesses. As an added benefit, with the knowledge I’ve acquired, I’ve been able to do some Instagram consulting too.

The moral of the story is this: If you want to work for yourself or create something of value for others, you don’t need to have a Tax ID or a fancy suit to do it. You don’t need to be a business person or fit some entrepreneur stereotype. You just need to start small and do something that excites you. 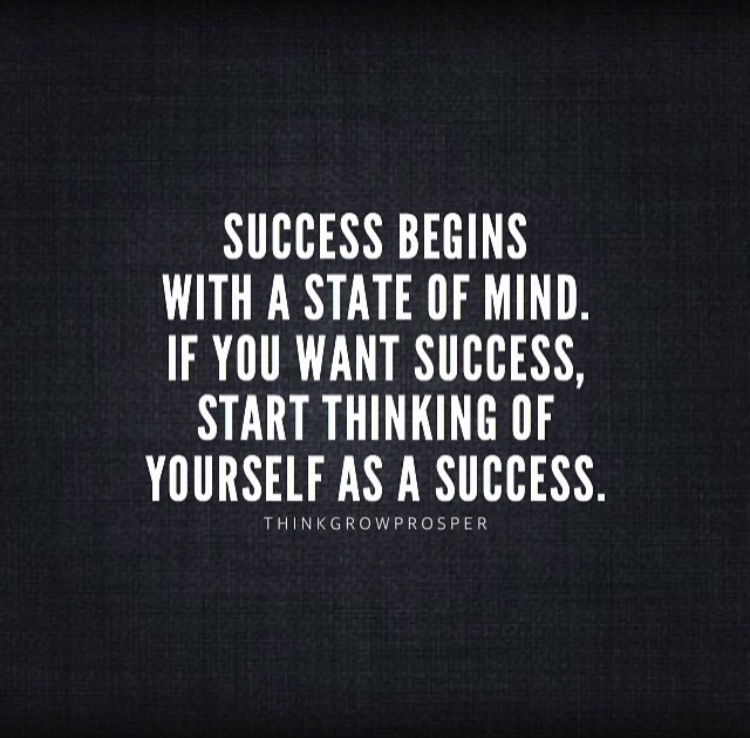