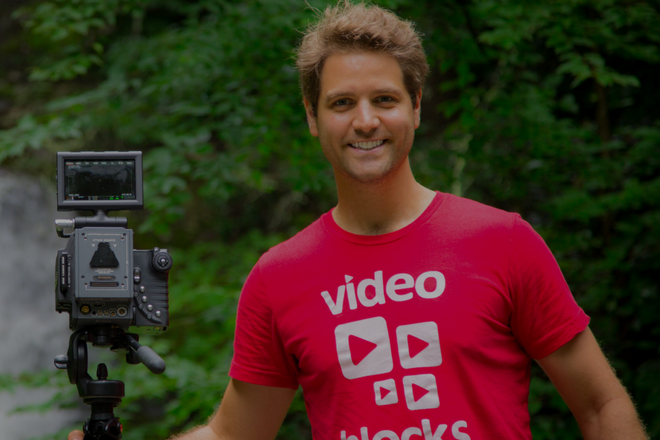 “When you start, I think every good entrepreneur should have pure hustle when they start, which means you come up with your business idea, you try to build a minimum viable product on your own . . . “

Joel Holland – Founder & Executive Chairman of VideoBlocks; pure hustle; hiring better people than himself; returning to the creative of the business.

Segment 1: (Length :04:00) – General Updates; Introduction to Joel Holland and his journey as an entrepreneur; starting his entrepreneurial journey as a kid; finding the win win between the product and the market fit; hustling video content city to city.

I was bummed about that and I started looking at … Trying to figure out why networks like Discovery Channel could take relatively mundane topics and make them interesting to watch.

“I was in high school, I was working on a small nonprofit television show for teenagers that focused on career advice. We would go out and interview some interesting people in all walks of life, whether it was a politician or a celebrity or a Fortune 500 CEO. We had all these great interviews and the real kickoff to the idea was we did an interview with Arnold Schwarzenegger.”

“It was hard to get him, it took months and months to get him to sit down. It was a great interview because his advice was solid, but when we went to edit it together it was, candidly, boring to watch because it was like a “Charlie Rose Show” for kids, which is total disconnect.”

“Back in the day, if you were an independent producer like I was, you couldn’t afford this stuff. It was reserved for the high end production companies and I thought that was unfair, on one hand, and also a great opportunity on the other to make some money while providing a resource for the rest of us.”

“By the time I was 12, I was a power seller on eBay hawking software that helps you manage all your collectibles. In hindsight, yes, I was very entrepreneurial, but I think that my drive as an entrepreneur was I loved finding something to sell and then finding people who could benefit from buying it and then everybody wins.”

“With the stock video example, in high school I had a direct need, which I then translated to being an opportunity because I figured there was going to be a lot more hobbyists and independent video makers. I saw a great way to fill a need, make some money.”

“I deferred from college for a year, I bought some camera equipment with my savings, and I started traveling city to city, and I hit about 33 cities in that year off.”

“I would literally go to a city, and the first city I traveled to was Seattle, I had enough money to buy a plane ticket there, I could stay in a hotel room for two nights, not a nice hotel but a Best Western. I’d go shoot all day long, come back to the hotel, edit the content and start selling it on eBay and on my own website. I’d then take the proceeds, buy a plane ticket and go to the next city. If I could not sell enough I couldn’t get out of the city.”

“It only happened one time where I couldn’t sell enough fast enough to get a plane ticket out of a city and I had to give up my luxurious two-star hotel room for a hostel. That was rough.”

When you start, I think every good entrepreneur should have pure hustle when they start, which means you come up with your business idea, you try to build a minimum viable product on your own, you don't raise money at first, you try to find sales, you find a market fit, you're doing customer service, you're shipping the product yourself, you're doing it all, you are the business.

“You don’t want to always be the business, you want to elevate from that.”

Segment 2: (Length :04:00) – Talking with Joel Holland; from doing all the work to hiring himself out of a job; Stepping back into creativity; Getting outside; Increasing productivity.

“I started doing everything myself. Once I realized where that could lead me and the business could grow beyond me I started hiring people. That was tough at first, then it was addictive, and soon I was able to hire myself out of a job.”

I built this incredible team around me that was much more capable than me, which is exactly how you should build a business, but along that process I wasn't doing anything creatively anymore, I was doing business operations. That is not what I love.

“When I started getting deep into that I started burning out. Once the excitement of going to work to work on the newest marketing campaign or to jump on a plane to shoot the coolest new footage in Hawaii or whatever, was gone, it was a lot less exciting to go to work..”

“Then I started feeling guilty about it, because I’m like, man, I have this great opportunity that most people don’t have, I somehow lucked myself into an awesome industry with a great product and people are buying it. This is awesome.”

“We were doing millions of dollars in revenue my first year out of college, that was another blessing. Everything was going right but yet I was getting tired and bored, and I felt guilty about that. That didn’t help, that spiraled it. Then I was like, what’s wrong with me? I’m broken, I’m an idiot.”

What I realized was I had completely put the camera down. I was like, let me break away from the whole operational minutiae and try to see if I can get away and see what happens.

“I went extreme but I bought an RV and I jumped in the RV with my girlfriend and my camera equipment and we started traveling the country. It was the best time of my life all over again. Seeing new places, shooting video, it made everything better.”

“What was interesting was even though I was out of the office and not there working hours and hours a day, I feel like my work product improved. I was in a better mental state, I focused on bigger picture things, I wasn’t caught up in the minutiae, I had my energy back.”

“I’ll admit at first it was very difficult. I think the first fire for any entrepreneur is horrifying because you’re like, I don’t know what I’m doing, I don’t know if I’m hiring the right person, I now have someone else’s life in my hands, they have a family, they have potentially kids and other obligations, and now they’re relying on me. That’s a whole new type of pressure.”

At first the hiring process was super hard.

“The way I approached it, I overthought it, but I was like, okay, what is the piece that is currently much of my time and that I’m not the best at and the least productive?”

“It was customer service. I was like, okay, I need to hire somebody to do customer service. What does that job look like? I was very specific about what the role was, what success and failure looked like, and I was very clear in the hiring process to say, “I’m the kind of person who is not a micro manager. I’m very much a I hire you, we’re an autonomous environment. Here’s what needs to get done and I’m not going to get in your way.”

“The first few hires were difficult, then it became a lot easier because what I realized was when you pick good people it changes the game. You have so much more time, they’re doing a better job than you were when you were doing it lackluster anyway.”

You have to hire. In fact I don't think I hired soon enough. You have to hire people, you need to make sure that you sit down and know what you are personally good at.

“We went through a lot in VideoBlocks, a lot of growth, we’ve raised close to $20 million in a couple different rounds. We are now closer to 80 people. We’ve had a lot of great growth in the company.”

“At the beginning of this year I took a step back personally and said, “What am I trying to accomplish and what else can I give to the business?” I didn’t think that I … Day to day operations I wanted to step away from so I could focus on strategy and new products and going forward and eventually figuring out what we become.”

“As you mentioned in the beginning, I’m now the Executive Chairman. I promoted our Chief Marketing Officer, amazing guy, to CEO, and I became Executive Chairman. It’s been an incredible situation. He’s a great manager, the employees love him, he does a way better job than I do at most of these operational things.”

It's now freed me up to focus entirely on the strategy of the company and PR and cheerlead. When you get the time to be a cheerleader for your company it's super fun.

“One of the big life changes I made after graduating to Executive Chairman was, I’m living in DC, I grew up in DC, it’s a great city, I’ll probably go back, but now is a time where … I can Executive Chairman from anywhere. As we’re chatting right now, I’m sitting in my home in Vail, Colorado, looking at the golden Aspen trees outside and it’s perfectly therapeutic. It’s been a great ride.”

“If you can remember why you started, then you will know why you must continue. – Chris Burkmenn