Ep. 11 – Ruben Chavez – From 0 to 1 Million – How to Create a Business on Instagram By Following Your Passion 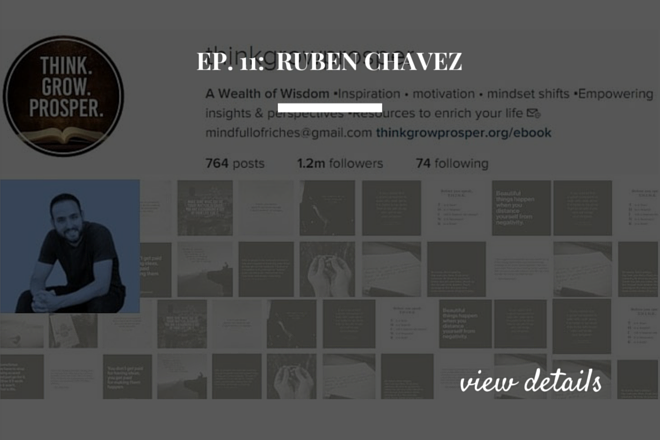 An exclusive conversation with Ruben Chavez, creator of @thinkgrowprosper and the man who inspires over 1.2 million people each day.

As part of our ongoing mission to inspire by telling the stories of guys and girls pursuing their passions, PRSUIT sat down with one of Instagram’s hottest accounts to get to the bottom of passion, perseverance and learn what it takes to be successful on Instagram. We did this exclusively through our weekly podcast, “Hustle Sold Separately” with our co-host and partner in crime Matt Gottesman from hdfmagazine.com. Be sure to listen to the episode below and read on as we highlight some of the most inspiring moments from our conversation with Ruben:

Episode 11: Ruben Chavez: From 0 to 1 Million…Creating a Business on Instagram by Following Your Passion

Ruben epitomizes the fact that, for the most part, any entrepreneur, hustler, creative doer, etc. starts at zero. More so, these individuals all start somewhere unique. While it can be quite daunting to realize the mountains you must move to be successful in today’s ‘go-go-go’ world stock full of every iteration and version of your dream and passion, to many, this is often a very liberating and inspiring realization. Ruben certainly embraced this thinking and grew his Instagram account from zero to over one million ardent followers, leading to many other exciting opportunities.

Just over a year and half ago, Ruben was truly at zero. From a recent piece he wrote on hdfmagazine.com titled, “We All Start Somewhere,” Ruben recounts his journey:

I wish I could tell you that I set out to build one of the largest inspirational quote accounts on Instagram from the beginning. But that would be a lie.

After taking a dive headfirst into entrepreneurship selling mannequins online, Ruben soon realized that it was not all glitz and glam and the journey was going to be a long, arduous one.

His initial effort w/ @thinkgrowprosper has since scaled to the creation of a media company where Ruben and his partner Steve Mehr, the man behind @agentsteven, head up the Motivation Mafia network, a collaboration of 13 like-minded individuals that help individuals and brands establish their voice and connect with audiences on Instagram.

The journey to this moment was not simple. One of the inspiring things about Ruben is where he draws his motivation for his media company from.

Ruben recounts this in the same article from HDF:

With no steady paycheck and sales from my primary income source dwindling, I decided to do what any self-respecting entrepreneur would do: Start an Instagram account.

At the time, I was rereading the classic success book, Think and Grow Rich. I had read it several times before but at this juncture in my life, I was resonating with many of the concepts on a deeper level.

For whatever reason, the idea of organizing my favorite quotes from the book into an Instagram account seemed attractive and fun. Don’t ask me why. What’s important is that I was excited about it.

Making quote graphics that inspired me brought me some joy during a particularly challenging time in my life.

So I kept doing it.

And then something I didn’t expect to happen, happened. People started noticing. Other users liked what I was doing and started following me and commenting with positive feedback.

Ruben became successful because his product was a manifestation of his passion. It originated from an inherently creative place and then it grew organically. It wasn’t a forced endeavor – he truly did it for himself because it spoke to him.

But how do you create something from nothing?

Ruben’s passion for his craft and business is undeniable. During our conversation, he gave advice on how to harness what you naturally have (whether you realize it or not)… talent.

If you’re sitting there and starting at zero… you want to think, what are my particular unique gifts? What do I bring to the table? What do people tell me that I am good at or that I naturally do that I could translate into creating value for people?

I am a big proponent of just doing, acting on the smallest thing, the smallest most exciting thing that you can think of and that you have the most ability to act on. Follow that out to the max procession that it can go.

That is a magical concept.

So you’ve identified what you’re good at, now what?

For some, figuring out what you’re good along with what you’re passionate about is an extremely tough thing to do. On top of that, you probably have a 9 to 5 (and the inherent stress and pressure that accompanies it) complicating your ability to truly see clearly. Ruben’s advice makes it clear that identifying the way to bring your talent to life in a passionate manner is not always a logical one.

It wasn’t like… I am going to start an Instagram account and make 6 figures. I simply found something that I liked doing. For whatever reason, I thought it was exciting and I thought it was fun.

Sounds easy enough. Identify what you’re good at, align it with what you’re passion about and BOOM! Not so fast…Ruben makes it very clear that it requires an important shift in thinking.

The challenge is that most of us have repressed what we like doing and what we naturally gravitate towards because we feel like we have to work and we have to make a paycheck and have to pay the bills.

Don’t go hungry [chasing this] but also get in touch with what excites you. What’s fun for you? It may be something very small but doing it trains your brain to act in that way and it will lead to cool things.

But my idea has already been done!

The reality is that most ideas have been done. The value we bring to the table is the unique twist we put on it. Sure, inspirational posts and media accounts have been done.

It’s your energy that you bring that is important and very unique. You will attract a certain tribe of people that will become your ardent promoters.

Sometimes it can be a lonely journey

Use that as an indication or interpret that as you’re on the right track… that you’re doing something cool.

If you really think about it, the people who have done really big things, who have changed the world, who have put a ding in the universe as Steve Jobs said, they were not understood. People did not get what they were doing when they were doing it.

That is OK and just know that. It is a badge of honor.

How do you manage fears?

Once you commit to a passion-fueled lifestyle with the aim of growing and scaling your business, fears and doubts naturally creep up on you.

Ruben faced this early and often when building his business but learned to conquer them with a simple realization.

We live in a place where fear is created mostly in our heads and it is important to objectively realize that.

You have to have the wherewithal to stand back objectively and say, 5 years from now, am I even going to remember this? The answer is no.

My buddy Steve [Mehr], who is also my business partner, was saying the same thing. He is a multi-millionaire and just says.. ‘you have nothing to be scared about.’

We have such a great opportunity. Yes, there are people who are struggling and yes there are those who have it hard, but if you are listening to this podcast… you are more privileged than most people. You have very little to fear.

The biggest takeaway from our conversation actually comes from Ruben himself:

Success begins with a state of mind. If you want success, start thinking of yourself as a success

Be sure to listen to the interview exclusively on iTunes here: Hustle Sold Separately Episode 11