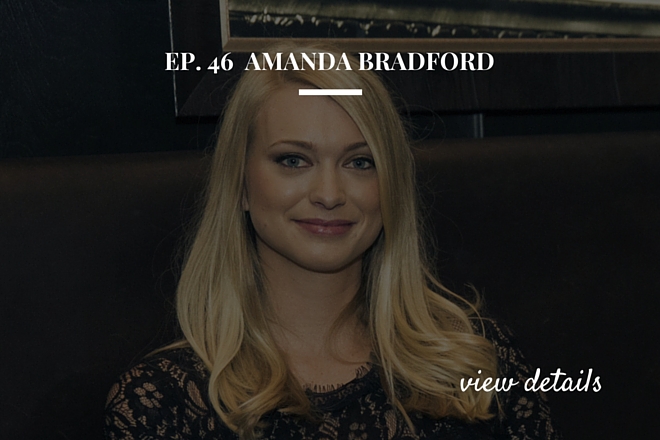 Segment 1: (Length :05:00) – General Updates; Introduction to Amanda Bradford and her journey as an entrepreneur thus far; starting The League App.

“I had just gotten out of a 5-year relationship and I was leaving business school . . . One was self-interest. I’m recently single and trying to do all these dating apps. I was frustrated with the lack of features, the lack of privacy and the lack of ambitious people. On the other hand, I saw that I was leaving Stanford and I thought it would be cool to keep that environment (for meeting people) keep going.”

“I do have a little bit of a technical background. I did go to Carnegie Mellon, I did study programming, but I actually didn’t write any code. I managed people that wrote code and found people to write code. It’s definitely doable. You can do it and you have to kind of decide how to manage it . . .”

“You don’t have to be the one coder. I did the whole co-founder dating thing where you meet some people and you try to pitch them on your idea. I quickly found out that most programmers want to build their own product and they sort of undervalue the business person.”

“I’m not one to be undervalued. I’m just going to pay someone to do this. Why am I going to try and sell someone on being my co-founder when I don’t really think I need one. I just need someone to develop this.”

“I recommend biting the bullet and invest in themselves.”

Segment 2: (Length :07:00) – Talking with Amanda Bradford; Challenges to being a female tech founder;

“They just assume that the girl does the marketing and the guy does the product.”

“Life is fragile. You don’t know what you don’t know. I decided that I don’t know everything and I started living from that context. Then I became very open minded and had to prove everything to be true or not.”

“I probably know more than all the developers about the product because I’ve been with the product the longest.”

Segment 3: (Length :07:00) -Building a community around your product and going to market with it; Having a waitlist and vetting; Handling critics.

“I found 500 guys and 500 girls and kept them in a pretty narrow age bracket. We did a bunch of events leading up to our launch. I call it pre-gaming. We did bootcamps, soul-cycle classes, open bar, a boat party, all that before we opened the doors to the app.“

“We had at least 1,000 people who had heard of us before we had a response so I think it’s a different strategy than a lot of apps take. But I really wanted to make sure that when we did open the doors, it was a really good party.”

“We kind of took a long time to open the doors, but in the process we tried to really engage people offline with events and I think that worked because we were able to start spreading brand awareness.”

“When I think about what is our competition, or whatever we’re trying to emulate offline, I do think SoHo House did a great job of maintaining this very high end brand and people want to be a part of it. It’s okay that you’re on a wait list; it’s expected and you know that you know you need to submit to SoHo House.”

“The wait list keeps things interesting because if you think about the best places to meet people, general work and school, both of those communities are super curated, super vetted, you have to go to interviews, write applications, write essays. It’s completely vetted and if you think about it, that’s where 90% of friends’ weddings I’ve gone to were formed from there.”

“Why wouldn’t we emulate the same process for both of those communities because at the end of the day we’re trying to get people to meet people offline. Let’s follow the best practices of the communities that produce the most amount of couples.”

RE: Haters “At first I would get super sad and upset. Some people would say, ‘This is so horrible, this is elitist, this is making our society worse.’ You hear comments and I’m like, “No, actually I shop at Target, I’m from North Carolina, I’m not a trust fund kid.”

I don’t think about screening my friends on income or where they went to school. It’s really about whether they are ambitious, driven and being cool. It’s hard to put into an algorithm and into words.”

“The conversation ends up, ‘Okay, you’re being very elitist.’ Why because a good school is correlated with a driven person, okay, but the data shows that.”

One of the issues is that you have a lot of spammy’s, fake accounts, you have people that are pretending to be people they are not, they’re using fake usernames, fake photos, there’s a ton of trolls . . . We’re trying to prevent all of that right at the get go.”

“People are classy, they respect each other. I don’t think a lot of the negative reviewers have done their homework. Go and be a girl on an online dating site and experience that for a week and see how horrible of an experience it is and then come to me and tell me that what we’re doing is a better version.”

Segment 4: (Length :07:00) – The quality of interactions from the people who use it; Passion for doing this.

“People like it. I think there’s a little bit of a shock at first because people are used to the instant gratification of Tinder where you swipe, swipe, swipe and until you get a match. With the League, you’ll join and maybe you’ll see 4 or 5 people the first day, then 4 or 5 people the next day and a good amount on the third day. It’s definitely a bit more tempered.“

“It’s a slower, more metered approach. For really busy people, they love that they don’t have to check it all the time. They get 2 or 3 matches a week and people they actually want to meet in person.“

“We treat the people as humans. We do show you Linkedin information and Facebook and you know who these people are, I mean, you don’t know because they’re somewhat anonymous, but you know they’re real people.”

“People don’t think of the person as a human and they’ll say rude things and totally flake on them, or say something horrible to them. I mean, this could have been the person that is in the cube next door to you or across the street from you. Let’s be respectful of the whole process.”

“It’s been an evolution for sure and I don’t think I knew this when I started the company. I started it knowing that it was something I personally wanted and I thought that other people wanted it, but I’ve been doing this now for 2 years and as I reflect on the highs and lows, what I get excited about is that I’m affecting something relatively new.”

“Touching people and affecting them, encouraging women and men to have high standards and be like, ‘No, I’m looking for a partner.’ Let’s look at relationships like a partnership and not this traditional role . . . Let’s redefine the relationship part.”

“I’m super excited to be a spokesperson for that and to help encourage that. I think we’re in a really interesting era. No one really knows what to do. We don’t have a lot of role models and we’re all like the blind leading the blind. It’s been really exciting to be a first mover on this new way of dating, relationships, family and marriage.”

“No matter what happens, you’re always going to have those critics and those haters. You just have to learn how to deal with that. I think I have and accept that”