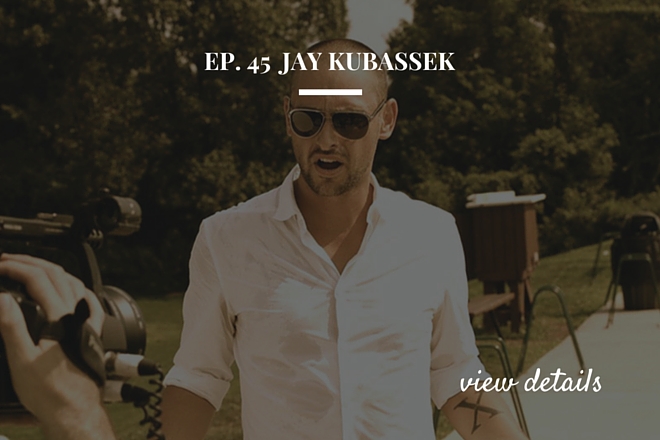 Segment 1: (Length :05:00) – General Updates; Introduction to Jay Kubassek and his journey as an entrepreneur thus far; starting his life in a commune and not being fulfilled.

“The thing that inspires me about my grandfather, and gives me such respect in terms of what he did, is that he was a person of principle.”

“Commitment is also one of my values. Being a person of a decided part. Make up your f***ing mind and do it and shut up. My grandfather, what he did, just to have the opportunity to live a humble life . . .”

“I had a really great childhood up until it no longer worked.”

“I lived on a commune. You were not allowed to leave the premises without permission. You were home schooled. There was no Internet, no TV, no radio. There are no magazines. Complete control over information.”

“It’s a very very powerful (and not in a good way) way of living. The majority of my memories from my childhood were warm and fuzzy, but there was always this feeling like something was missing.”

“That was me up until the age of 24 when I decided to leave.”

“But I knew how fulfilling it was when you actually believed in what you were doing.”

“I made sure I did enough work on the gray matter up here (brain) before I left. That included coming to complete utter acceptance and peace with who I am, with what I have and just waiting for the yearning to escape.”

“I made sure I came to grasp with my past before I stepped into my future.”

“I googled Snoop Dogg. I had no clue. (laughter)”

“It was a box I had to check off my list. Been there, done it, see what’s out there.”

“Life is fragile. You don’t know what you don’t know. I decided that I don’t know everything and I started living from that context. Then I became very open minded and had to prove everything to be true or not.”

“I don’t think a wakeup call is something you find. The wakeup call is automatically programmed. The lessons you need to learn, the universe will find a way to teach you one way or another.“

“We’re motivated more by pain than opportunity. For a lot people, they waited until they were either forced to do it for money in their 30’s, 40’s or 50’s, or they’re forced to do it because they just can’t settle. I just can’t work for anyone.”

“There’s no reason to be a starving artist, let alone a starving entrepreneur. It’s 2016 for goodness sakes. This phone has more power than the entire space program had to put a man on the moon.”

“Wakeup calls come in any different form. It’s a matter whether or not you are in a place of life where you are going to take full and radical, unconditional responsibility for everything; the good, the bad, the ugly, the stuff you have no control over.”

Segment 4: (Length :07:00) – Understanding your talents (your inner genius); Building with community in mind.

“I don’t think a wakeup call is something you find. The wakeup call is automatically programmed. The lessons you need to learn, the universe will find a way to teach you one way or another.“

“When you’re enlightened; when you seek awareness, you’re going to get what you ask for. Really quickly, having the money, the sex, the drugs and the rock and roll didn’t make me feel better about myself, so I quit and moved to Lawrence, Kansas.”

“I thought to myself, I’m going to go to school to get my MBA, drive a Porsche, a lot of greed, while working some office tower and having essentially the opposite; the other end of the spectrum.”

“Little did I know that I couldn’t get student loans, or even borrow money. I couldn’t do anything without credit. I didn’t have job history or credit history. I’m literally an alien. That’s when awake up call happened. If it’s to be, it’s up to me.”

“So, I learned really quickly, there’s no path and this is usually the breaking point where they return on their hands and knees to their old life, but to me that wasn’t an option.”

“That forced me to take full responsibility. At that point, I needed to figure this out.”

“I questioned, why do I exist. . . just by kicking, clawing and scratching my way out of necessity, out of pain, I said to myself, “F**k it! I’m just going to make a million dollars, put it in the bank and finance myself thank you very much.”

“To make money so I can finance reinventing myself and putting myself through school, I built my businesses out of necessity.”

“Make sure you know your values so you’re not misled. You’ve got to surround yourself with the right people.”