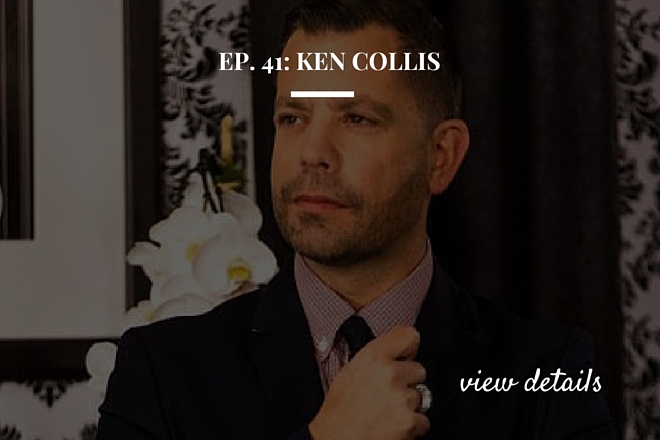 Segment 1: (Length :05:00) – General Updates; Introduction to Ken Collis and his journey as an entrepreneur thus far, as well as his background into creating TLK Fusion;

“Entrepreneurs in today’s day and age are far different than when we had fax machines and brick cell phones.”

“Things have changed. We live in a Kardashian era. Love them or hate them, at the end of the day it’s a society that we’ve become. You’ve got Donald Trump running for president, whether he’s your choice or not . . . and we live in a society where Vera Wang is doing $500M at Kohl’s and J-Lo is doing another $100M so that’s what we’ve become.”

“I realized that the finance industry is black and white. After 1500 round trip flights and the fact that you’re never able to be with your family the way you want to, I said, ‘You know what, I want to do something a little bit more creative as I’m getting older.'”

“So I hopped in and took a position with Clear Channel Communications. I headed up some of their largest accounts, but in not necessarily understanding the advertising agency, I was that guy that took the underdogs (you know the small to mid-sized brands that had $5,000 spends a month) and said, ‘Look Clear Channel. Let’s build them. Let’s build an empire.'”

“They’d (Clear Channel) look at me and say, ‘You’re doing things we’ve never done before. This is beyond any vertical we’ve ever opened up to.’  I told them to give me the platforms like this to be able to grow and that’s what we did.”

“I stayed with Clear Channel through 2009 and I was having lunch with Kris Jenner and we said, “You know, it’s best for us to go ahead and take this to a whole new way. Don’t worry so much about Kim. Worry about Khloe, Kourtney and the rest of the family and let’s grow it.’ So I started TLK Fusion.”

“TLK stands for Talk Fusion because I believe in a trifecta approach. I believe in taking brands, celebrities and really forecasting the the philanthropic side of what they do and taking it to the public.”

“It’s not easy. When we got ready and we were ready to launch Instagram campaigns, then we’ve got snapchat that came around. And now we’ve got so many other means that are coming towards us that it just grows and grows and grows.”

“Also the same with social media marketing. Enough with ad pages. They don’t work. They’re $20 a pop. If you want to go and drop money go ahead, but we went after influencers. We drive the traffic to the website and tell the story.”

“I’m seeing a lot more male demo engaging then we’re used to seeing. We’re also seeing a lot of older demographics. We’re seeing the 55+, like my pops who’s 68 and starts Instagram, but won’t leave me alone.”

“You’ve got underwear being moved by the Game posting pictures of him with his jock. Just yesterday Usher dropped a photo that was supposedly a mistake on snapchat. It’s changing. Whether we love it or don’t love it, it’s a society we live in.”

“We’re not living under a rock. We don’t have to ask for apologies anymore. In the marketing world, it’s okay to push the envelope, where it used to be very taboo. You konw, our grandparents would be rolling in their grave to think what the Game has done to market X, Y, Z amount of sales, but it’s just a society we live in.”

“Now, I will tell you we’re seeing changes. There’s some celebrity brands in retail that have failed and we all know who those are. But it’s okay because now what’s happening is consumers are becoming more aware that celebrities are marking up 90% to make a percentage of this kind of a deal.”

Segment 3: (Length :07:00) – Is the playing field even and are there more opportunities than ever before?

“Look, we live in the United States and we have the American Dream. I feel that everyone needs to try to, if they care to, try to accomplish that dream. Whatever their dreams are is totally up to them, but for an entrepreneur’s dream, we have more resources than we ever had.“

“Now, you can have X, Y & Z influencer, that really isn’t famous for anything other than they’re beautiful or a little bit heavier and there’s a following behind them. We’ve opened up spectrums and opportunities that are far different than anything we’ve ever experienced and I think that now there are no excuses.”

“There are no excuses. Business owners need to get paid blasts and put their money back into marketing. Develop a brand, then comes marketing, then comes your paycheck and your Lamborghini. I preach about that all the time.”

“Reinvest in yourself. When I hear business owners just say, ‘I just don’t have the financials to be able to do it,’ I turn around and say, ‘Well, where’s your money going? Where is your capital that you’ve raised to do this?'”

“If you’ve done some sort of crowd funding to be able to raise this capital, don’t just reinvest it into a nice payday for yourself. Reinvest it into letting the world know about it cause there’s plenty of means to do it. I think that’s key.”

“There’s no questions about it. We’re pushing the envelope and it’s going to a whole new level that I’ve never seen and I don’t think it’s going to slow down any time soon.”

Segment 4: (Length :03:00) – Advice for new entrepreneurs entering a new market with authenticity and using influencers on their level to be effective; Differentiation

“Be you. Don’t ever ask for forgiveness and grow thick skin.“

“When you become strong is when you build thick skin. You don’t take the review personal. You take the reviews of what consumers are saying about your brand and better yourself. And some of them you just throw in the trash can.”

“Yourself needs to be who you are and you truly need that to be an entrepreneur. Otherwise you will fail. Clearly.”

“You want the best of the best. My dad always raised me on, ‘Tell me who you hang with and I’ll tell you your future.’ I totally believe in that. Steve Jobs is an amazing man. I believe in him. I love everything he did.”

“I also believe, much like he stated, you hire the best of the best and you let them run with the creative idea. I’m not a micro manager.”

“It’s the power of ‘we’. If I had to sit here and dictate than we open up a totally different environment and that’s just not where we are. It’s not the 70’s and the 80’s anymore with the mean boss.”