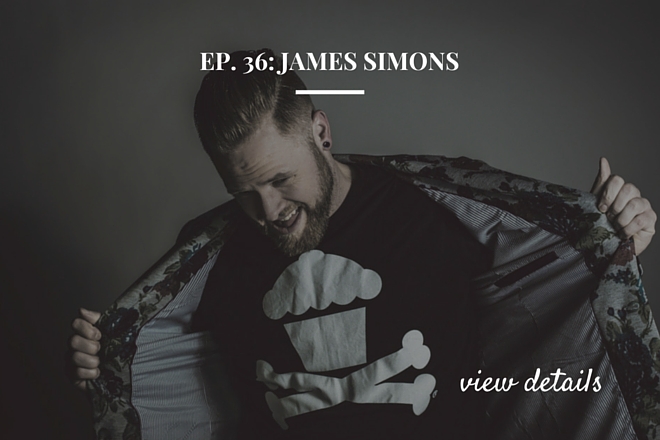 Segment 1: (Length :05:00) – General Updates; Introduction to James Simons and his journey as an Internet entrepreneur thus far, as well as his background; Getting started on the Internet

“I’m learning a ton all the time and I’m just excited to be here and moving forward to continue utilizing these different social media platforms to find my voice and be able to have a creative outlet.“

“We live in a world now where so much of someone’s worth or brand value is based on their social clout and social proof. Do you have “X” amount of followers or this many views, etc. etc. There’s a lot (a lot a lot) of people doing some really cool things that don’t yet have that social proof, that clout in the Internet world.”

“At times I might have dabbled in too many things, but at the same time I see it as a strength because I’ve been able to try a lot of things and get to a point where I’m like, ‘You know what, this wasn’t it for me.’ You start to learn that adage of ‘never give up’, but there also needs to be this sense that maybe you’re not doing the right thing, then knowing when to pivot at the same time.”

“Eventually you’ll probably find that thing that  makes your soul.”

“I started posting some covers to YouTube back in 2007. Right when YouTube was getting off the ground. At the same time Vaynerchuk was starting WineLibraryTV, right? To this day, I have very few regrets and one of them was not sticking with YouTube in 2007.”

“Back then I was like, I know this is going to be hard, I was young (early 20’s) – I’m going to go out, get some beers with my friends and all this other stuff. I didn’t really take it seriously. If I did, I’d probably be speaking to you from a much different place right now.”

“I uploaded some covers, spent a year and a half getting familiar with the platform and getting good traction.”

“I (eventually) got more excited about how to transition this into something where I can work a little bit more from home, spend some more time there and still kind of ignite my passions in music.”

“Fast forward a few years. I still love with music but now I’m more into the space of the creator or entrepreneur. Whether it’s music or not, how are people putting themselves out there, finding an audience, what techniques are they using and it comes down to being consistent and offering value and entertainment.”

“Right now, my big three are SnapChat, Instagram & YouTube. YouTube has always had a place in my heart because I’ve been on there for  years. There’s a million places you can promote yourself, but depending on your resources and time, my opinion is to get really good at a few first and then go forward from there.”

“For my personality, SnapChat just clicks very well. I’m a little bit of a goofball. I like to do things off the cuff. As much as I like long form content that’s scripted, I also really enjoy the more ephemeral, right now, in your face that SnapChat offers.”

“I see SnapChat as a challenge to be creative everyday in some way. How can I make going to the fridge to get a beer entertaining.”

“There’s that coupled with also wanting to give people a little glimpse into my life.”

“It’s an interesting time right now. In SnapChat, it’s shifting from 17 to 20 year olds and now to the whole entrepreneurial community is hopping on board. We’re seeing that whole wave . . .”

Segment 3: (Length :07:00) – Managing priorities and staying consistent; Setting goals for the side hustle.

“The ‘I don’t have time excuse’ is something I’ve been a victim of, but if you care about something, then you make time for it. End of story. That’s it.”

“As far as a side hustle goes for me. People see the Instagram posts or the SnapChats and the YouTube videos that last 4 to 9 minutes and that’s quick. A lot of people that aren’t in this (people who not creating content on a regular basis), don’t understand how much effort it takes to actually come up with content consistently that’s worth consuming.”

“At the end of the day, if you want to make time, while I’m working my day job to pay the bills, along with a relationship I care very much about, something needs to be sacrificed. For a lot of people, that’s going to be their leisure activities.”

“I go to work, I make my money, I leave my job. When I leave my job I leave all the bullshit there and get to work on my side hustle.”

“It’s different for everyone. If you really want to make something happen, which in my case is transitioning from a life as a bartender to making something more, then you have to sacrifice the things that aren’t getting you closer to your goals.”

“That’s why you better pick something that you really love to do otherwise you’re not going to last. It sucks sacrificing things you love, but if you also love the work that you’re doing, then it doesn’t hurt so bad.”

“You need to mitigate your expectations a little bit. I’m a big fan of setting smaller goals . . . It’s about smaller goals and going in deep with smaller audiences.”

“It’s depth more than width a lot of the times. So it’s not always about how can you reach the masses. It’s about building those relationships and networks.”

“I’ve sucked at setting goals my whole life, but I’ve actually read a book by Lewis Howes called, The School of Greatness, which talks a lot about setting goals and I’ve gotten better at it in the last year. That’s part of the reason I’m having success with my consistency.”

“When you set goals that are kind of pushing the limits but also obtainable, it’s a way of keeping yourself accountable.”

“Setting goals is definitely important. I have a system. I have a few that I write down on paper. My biggest goals I write down on this certificate and frame it and then keep it on top of my computer so that everyday I come in and look at it, it keeps me accountable. That helps me stay consistent.”

“You see an 8 minute video. What you don’t see is the 9 months saying no to my friends going out and staying home on Lynda.com watching tutorials learning how to edit videos. That’s not glamorous, but that’s the hustle.”

Segment 4: (Length :07:00) – Delegating while wearing multiple hats; Now is a great time to be an entrepreneur / creator.

“When you’re in the infancy of trying to create something, you’re wearing every single hat, right? So in a way you really need to be smart with wear you allocate your time and your resources because you can’t do it all. There needs to be a self auditing that goes on.”

“What am I doing right or doing good that I can really go all in on and then some of the other things that need to be taken care of, the housekeeping stuff, is there a way that I can get some help with.”

“The more you grow, the more work there is and you can’t do it yourself.”

“I think that the people that are most successful are the ones that are driven by the idea of fulfilling their purpose.”

“Start in the direction of your dreams and before you know it, they’ll be coming into scope.”

“If you look at the last 30 years, there’s never been a lower entry point at trying to do whatever you want. You can literally build a following with just a cell phone.”

“Along those same lines, that also means, everyone’s doing it, which means there’s more competition. These days it’s incredible that the opportunity is so great but the competition is so wide. So you really have to spend a lot of your time being creative and how can you set your own voice and rise above the crop.”

“You have to spend a balance between learning and doing. What matters now and what matters the most. Then cut all that other shit out.”

“As far as being an entrepreneur in this day and age, everything you need to do it is at your fingertips so it’s up to you to allocate your own time and in an efficient manner to get to where you’re going. Efficiency is so huge. It’s talked about, but I think it’s underrated.”

“You have to understand your own personal DNA. Don’t do things because I do them or Steve Jobs or Mark Cuban tried it. You need to know your personal brand and stay true to it.”