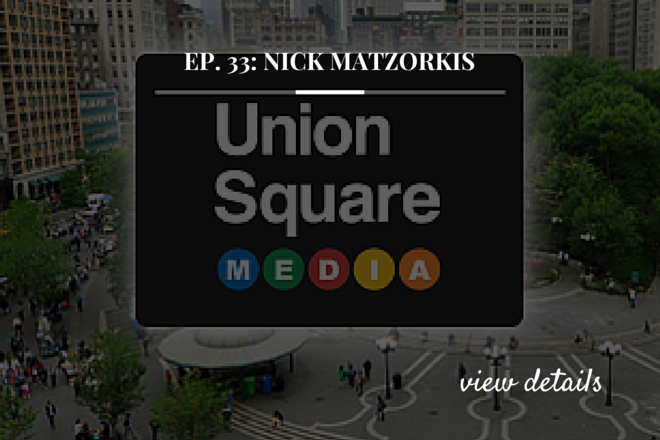 Nick Matzorkis –  Serial Entrepreneur; Starting with what you have; Focusing on the idea and traction; Looking for consistencies; Managing multiple ventures; Starting Union Square Media

Segment 1: (Length :05:00) – General Updates; Introduction to Nick Matzorkis and his background to creating his various ventures, including his newest one Union Square Media.

“Generally, an entrepreneur you’re born an entrepreneur. It’s not that at some point I crossed over into the threshold and thought that I want to try ‘entrepreneuring’. It’s something I had just done even before I had first done my first business. It’s really something that had just been second nature to me.”

“The first actual businesses I started where I had real cash flows were in high school. And almost all the businesses I’ve started to date have been self capitalized. In other words, I start the business with whatever cash I have in my pocket and build the company from there. That’s one of the reasons I’ve been fortunate to start so many companies yet have never had a failure; a personal bankruptcy or in business.”

“I operate businesses from the ground up; out of my own cash flows. If you’re not getting movement, you can’t really fail because it requires movement in the business and cash flow to keep going. And if you’re able to prove that works, it usually means theirs viability with the business.”

Segment 2: (Length :07:00) – Talking with Nick Matzorkis; Starting with what you have; Focusing on the idea and traction; Focusing on today.

“I focus on the idea and if I feel really strong that the idea is good, then I’ve always felt that you shouldn’t worry about the capital. If you have the right idea then you can figure out how to get traction and get started.”

“I’ve chosen businesses where generally this works. So you can avoid a lot of sloppiness and avoid a lot of mistakes out of survival. I’ve found in other situations that are capitalized . . . there tends to be a sloppiness in that. When you operate out of your own cash flows, there’s really no room for error. You need to really focus on what works.”

“Some businesses at stages of growth require capital to grow so I’m not in denial of that, but as a general rule and point of reference to operate companies that way (the way I have), it’s pretty proof positive that your model, that your idea, that your vision has traction and a place in this world.”

“Focus on the exact cause and effect correlation between the actions that you need to take and getting the end result you need to operate going forward.”

Segment 3: (Length :07:00) – Scaling companies with people; Consistencies and fundamentals across all industries and companies;

“When you’re hiring people and building the team around you, once the company gets to a point where you require others, loyalty is paramount over all else.”

“I’ve been in a wide variety of businesses, so the circumstances reflect back the indication that you’re on the right path; the signs along the road that let you know you’re going in the right direction.”

“It’s a matter of coming up with the right idea, but then figuring out a right strategy that will allow you to test it in the real world to see if it has traction.”

“Find the right way to get the distribution; to get the word out there. Then see what the actual reaction is.”

“I’m a huge believer in timing in regards to almost everything . . . I start businesses when the idea comes to me as a viable business and the timing is just right for it.”

“How do I do it? Well, it’s a lot easier when you’re launching an idea at the right time because you have the wind behind you rather than swimming upstream. So a lot of it has to do with the good ‘ol take it back to the basics of hard core gut instinct of knowing when to start a business and how to put it into the marketplace.”

“As far as how I manage them all, successfully and simultaneously, it’s a lot of work and you guys know that . . . it’s crazy long work and there’s no separating the work from life.”

“It’s made a lot easier when you launch at the right time and you have the wind at your back.”

“If you don’t have a web site, you don’t exist in the new global marketplace.”