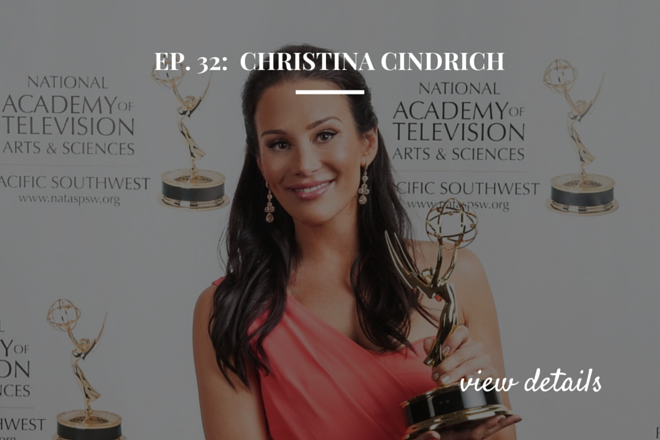 “What’s been an important part of my journey so far is leaving LA where I was going the whole acting thing. I started getting into producing and hosting, but for me the biggest move was moving to the mountains of North Carolina in 2009 for a job.”

“I was the only news anchor in 12 counties and being a news anchor wasn’t what I wanted to do, but my goal was to start with a small market and take it over and then move to the next level up.”

“After 8 months, I moved to San Diego for AWE TV (Formerly Wealth TV). Our viewers were about 25M so I was there for 25 years, did my thing, learned the in and outs. I think that one of the best things for me was learning how to do it all and not having the pressure to be on network like a place like NBC or CBS.”

“So I was able to really learn how to be a one woman team. I made many mistakes and learned from them. When the 5 years was up, I felt like I finished my chapter there.”

“I’ve been making sacrifices my whole life, but it’s been something I’ve always wanted to do. I didn’t have a big social life in high school because I would leave early to go to my musical theater classes downtown. I tried to do the whole social scene and it just wasn’t for me.”

“Moving to North Carolina was the biggest sacrifice I’ve ever made cause I was leaving a life that was an LA lifestyle that was fun. I had my own schedule but it just wasn’t consistent and I wasn’t reaching my potential.”

“North Carolina was rough. I was by myself. I didn’t have any friends . . . Looking back I knew it was a sacrifice, but I needed to do it.”

“Then moving to San Diego was the same thing. Although San Diego is a great place to live, I was there for work. I would eat, sleep, work and work out so I’ve given up a lot of my social life.”

“My dreams when I was younger was to always be married with kids by the age that I am now, but you know, maybe that’s not for me (laughter).”

Segment 3: (Length :07:00) – The work that nobody sees; Christina walks the audience through a typical production shoot.

“When I’m sitting here trying to figure out  how I’m going to pay my next bill and someone has the consistency of having that job everyday – whereas right now, I don’t. They might have a family they go home to, I don’t.”

“Everyone has their own definition of what they think is living the dream, but people will say I’m lucky and that’s another comment I don’t believe in. I think luck is by chance.”

“What’s the difference between luck and being blessed? For me, I have a lot of gratitude towards the opportunities that have come my way and I’ve taken advantage of those opportunities and I’ve worked them to my advantage.”

“Let’s talk about Private Islands because it’s the perfect example. Pre-production on that would take about 2 to 3 months. First I had to come up with the idea of where I wanted to go. That’s the fun part . . . then I would craft a show around it. Next is getting the boss to approve. Fortunately, my show had a great formula to it, but it was really well received by the viewers.”

“I never had a lot of problems with my pitches, but that’s one of the hardest parts is getting the show approved. From there it’s a bunch of contacting; the resorts, the activities. There’s so much that goes into it. You don’t just show up to an island just go with the flow.”

“And not only that, but island people work on a much different time schedule. They’re very laid back so it’s definitely stressful trying to get itineraries organized and all of that. Now, for the actual shoot, which I would go on with one cameraman, we would run across a multitude of problems. It’s very difficult to film a 3o minute film within 4 to 5 days.”

“Not to mention . . . the second we landed, we took a quick shower and went to work. So it’s non-stop and I mean these are like 16 hour days. Of course, it is fun. As the producer and the person responsible for the outcome of the show, that’s all I could think about for the entire trip.”

“So when people see me in a hammock, I’m in the hammock for literally 20 seconds. We get the shot, dry off and we move to the next interview or whatever. So that was the process.”

“Then post production is a whole different process. We get home. We would literally have to be in the office the next morning. There were no days off, and basically I would have all this footage and then try to figure out my show. So, for me, I kind of over analyze so it would take me a couple weeks to gather my thoughts to figure out what to do with it.”

“I would finally get the groove of writing the show. That probably took about a month and then I would give it over to an editor and then oversee the full edit and the final edit. Then sometimes you have to have the show watched by the network and they can sometimes not like it. Then you have to make changes. It’s a whole process.”

“When you get any kind of recognition and a show does really well, or I find out I was number one that week, that for me, is amazing. In that moment I’m like, ‘that was worth it.’ But you know, throughout the whole process, feeling that hustle and being stressed by being overworked, there’s something about it. That energy is a drug for me.”

“The pursuit of happiness really depends on what point in your life you decide what really makes you happy. For me, this past run has been grinding and doing what I do.”

“As far as balancing my life – this is basically why I left my network. I was ready to move on to bigger and better opportunities, but I was also ready to have a life so I decided to move back to LA.”

“Now, LA is not always the best to try to date. I’ve tried dating and it has been an absolute shit show so that was really discouraging. Then after the fact I’m like, ‘okay, I’m going back to the career.'”

“The worst time to attempt to date is when you’re transitioning from one lifestyle to another. I wasn’t going into an office every single day so my energy was not as focused where it should have been. I totally agree that everything will come to you when it’s supposed to be.”

I messed up many times but I learned from my mistakes. It’s all a lengthy process but none of us are entitled to amazing jobs or interesting projects. These are things we have to proactively seek out and they take effort to earn. It takes time to practice your craft and sharpen your skills. Not only that, but you need to build confidence and a strong body of work, which a lot of times is done through paying your dues

– Christina Cindrich – From Interview with HDFMagazine.com

“You sacrifice today for a better tomorrow. I’m not trying to think about the quickest way to success, but instead I’m just trying to build something that the world can be inspired by.”

“I’m doing something that I’m passionate about and if you don’t love what you’re doing and having fun doing it, then you’ll give up. You have to build things for yourself and always stay hungry. Never satisfied.”