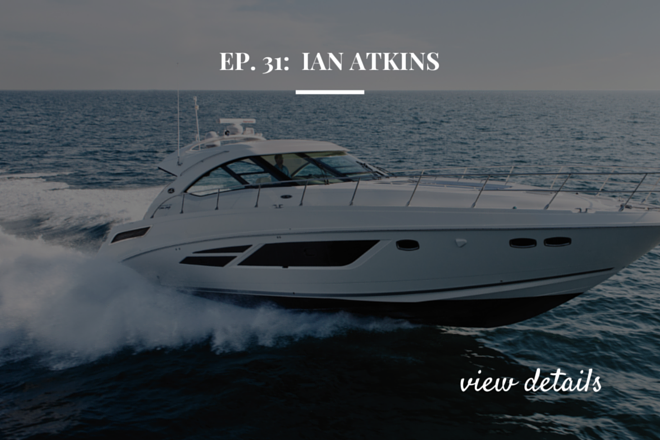 Ian Atkins –  President of Dominion Marine Media – YachtWorld.com, Boats.com and More; The importance of having patience; Pitfalls of scaling too fast; Surrounding yourself with good people.

Segment 1: (Length :05:00) – General Updates; Introduction to Ian Atkins and his background to becoming the President of Dominion Marine Media; Starting during the dot com era; Making a lot of mistakes.

“We were a startup in San Francisco in the end of 1999. My background is almost totally in the boating business. I’ve been a boat builder, dealer, broker, boat owner and general boating nut, and spent far too much money on things that float.”

“Started off working in a merchant bank and decided that was definitely not for me and got involved in the boat business at a pretty young age and have been involved ever since.”

“I was a boat dealer in the 90’s and as the economy started moving forward again, people were looking for different ways of promoting their business. We were debating how to take advantage of this thing called the Internet, which was pretty new then. We have lots of stories about what didn’t work and very few stories about what did.”

“When an old business acquaintance of mine called to say he just spent $10,000 on a domain name, lest I had to work out what the hell was a domain name, called boats.com. He was going to make a fortune and I thought well possibly.”

“He called me about 6 weeks later to say they had raised $6M in Silicon Valley, started an office in San Francisco and do I want to join in. I think I was on my way to the airport before I said yes.”

“There were about 15 of us in those days looking for a business plan and the customer. We made every mistake in the dot.com boom.”

“The one thing that we did that was smart in that period was to acquire a business called YachtWorld.com. It had 200 customers and they were paying $25 per month for an online presence for their yacht brokerage businesses. And it didn’t feel like it at the time, but that was the game changer right there because we had customers and revenue.”

Segment 2: (Length :07:00) – Talking with Ian Atkins; The importance of having patience; Convincing boat owners they needed an online presence.

“We had to be patient and we had to wait for the results to speak for themselves.”

“There were two sorts of customers in those days. The consumers were already there, by the way. The consumers were already online looking for boats just like they would order online looking for a house or a car. The real estate business and the automotive business was much quicker to engage with that consumer base than the boat business because of the history of being a little bit slower to respond to new technology.”

“It took a long time to convince them that it was the future. We were so early and the competition was pretty thin on the ground in those days. What activity there was, we could demonstrate to the customers we have them. So there was just enough glimpses and benefits of advertising online that they got the message.”

Segment 3: (Length :07:00) – How to weigh listening to your consumers/industry versus leveraging a glimpse of hope; more on the importance of having patience.

“I know Henry Ford also said, ‘I know 50% of my marketing budget is working, but I don’t know which 50%’. We had a great opportunity then to measure expenditure and the little bits of money that were being spent with us to be directly connected to activity, whether it’s a lead or walking into the dealership . . .”

“We were able to demonstrate value and the other marketing exercises and activities that the company was engaged with in those days, as we know, was really hard to measure by a print ad. How do you know if its worked or not?”

“Now, the print sales companies have very good stories about how you measure print advertising, but those stories WERE NOT able to say, ‘give us $150 and we’ll give you a few leads. We can even track the direct activity in terms of selling something.’ So it was much easier for us to justify the little bit of money with us versus the other competitors out there.”

“The first thing is . . . It’s very easy to get carried away when somebody paints you a picture that you really want to believe and you start to forget your instincts that got you there in the first place.”

“The second thing is, and this is the probably a message for anybody trying to get a startup off the ground today, is the pressure comes to grow too fast.”

“The pressure in the early days was to grow fast. I went to meetings where they discussed increasing the burn rate. They were going to buy their way into the market. Okay, so we did that. Months later, we couldn’t make payroll because we decided the burn rate was just burn rate. There was nothing coming in the other way.”

“From a massive evaluation in the first few months of our existence, to are we going to make payroll, well that’s when the business really started.”

“We moved out of San Francisco, went back to Seattle, cut the costs and got real.”

“The patience in those days was impatience. If we went too fast, then we were going to burn out like most competitors. So we just stuck to what we knew which was helping people sell more boats.”

Segment 4: (Length :07:00) – Avoiding pitfalls of growing fast that affect your ability to build; On not compromising for the short term gain; surrounding yourself with good people.

“We just had a passion to make it work . . . We knew that the Internet could make a difference to the Industry. If dealers could sell more boats using a low cost advertiser and they would be more successful then we’d get our reward that way. A successful business that acknowledges our help – we’re going to get a better relationship with that customer.”

“We could have made more money more quickly and told people things that may have been exaggerated or may have been not true at all, but we stuck to what we knew would work. We felt more comfortable there. The personal idea of what we think is right turned out to be right for the business.”

“We could have made more money faster, but luckily we didn’t have to.”

“Good advice in the early days is just sticking to the core business that you know and try and not to shift the business model to the new bright shiny object in the corner. Stick to the original premise.”

“Getting customers to trust us was a bit of a challenge, but I think we met them in the middle and accepted the things that we were never going to convince them of.”

“The philosophy has been consistent all the way through and the people that we brought into the business with those additional skills that we needed have been chosen because we saw they have the same passion; we saw that they had the same determination and willingness to do the right thing for the customer which is not as easy as it sounds.”

“It really is trusting your instinct, surrounding yourself with people that are testing your instinct with metrics, and keep checking you’re on the right track., If somebody wants to suddenly veer off, look at the reason they want to veer off and test it very carefully, but it’s got to be a big opportunity.”

“The Internet has enabled a different style of business and sales and marketing . . . The clever new young, guys look like they’ve been doing it for a number of years when they’ve really been doing it for 6 months.”

Boating Industry: The whole world of social media, digital marketing, etc., can be overwhelming for dealers and even manufacturers. Any words of advice for helping them figure out how to manage it?

“We’d all love to have a winning master strategy that delivers instant results on several fronts at once, but with limited resources, we all have to stay focused on what we can manage effectively. Try choosing one new initiative each quarter. Continue to build on those that show results and are within your budget and staff resources“

“BoatingIndustry.com is the voice of the boat dealer community in the USA and they have 4,000 or 5,000 members, or customers . . . The vast majority of our customers are small to medium sized businesses where the person we’re talking to was painting their boat in the morning, he’s got to go count money and parts in the afternoon, and the hour that we have booked at 5 o’clock in the afternoon is where he’s going to spend his marketing.”