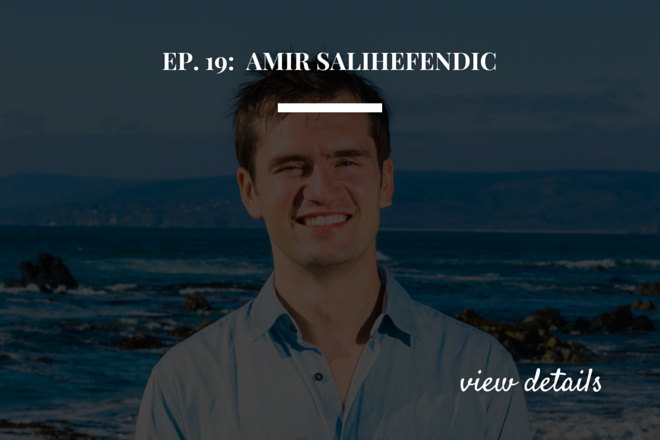 Amir Salihefendic –  CEO & Founder of Todoist (Doist); First Startups & His Journey; Creating a Startup to Solve a Real Problem; Work on Something With Passion; Appreciating the Journey and Not Just Focusing on a Finish Line; Tying Your Personal Mission to Your Company Mission

“I needed a simple system to manage myself. I looked on the net and there were only 1 or 2 companies that actually had products that were “to-do” apps. I didn’t really like them so okay, I think I can do this better and then I just started this.”

“I built this tool, put it on my blog and it got popular. It grew and people shared it . . . I built Todoist and then I joined this other startup (Plurk). At this point, Todoist was being built on the side and we grew it pretty big. At some point I didn’t sleep very well because it was growing like crazy and I had zero knowledge on how to scale.”

“You can learn a lot of stuff as you go along. I don’t really like when people scale at such a high rate because it’s hard to actually fix stuff and make it better. It’s like a huge fire and you’re just putting a little water everywhere.”

Segment 2: (Length :05:00) – Talking with Amir; Taking time to appreciate the journey; Not being focused on a finish line or an exit.

“Plurk was my first real thing that really grew big. I was actually quite missable in the whole thing. I didn’t really appreciate it. One of the problems is that it was very stressful. Having something that grows very big and not having that much experience is a very stressful situation to be in.“

“With Todoist, right now it’s a very comfortable situation because I have a lot more experience. I really enjoy everyday. I go into work with lots of energy and I love my job. Not to mention that Todoist has grown in a controllable way where we are in full control of everything that happens.”

Segment 3: (Length :04:00) – Motivation to solve real problems; Not creating a startup just to create a startup

“I joined something because I wanted to join, not to just connect the whole world.”

I think things become much better when you connect your personal mission with the mission of your company. Stress becomes much easier to handle.”

“Looking at “exits” – With Todoist, I don’t really look at the exit. I really want to build something. I don’t have an exit plan.”

“If you look at all the big companies that really changed the world such as Apple, Google, Facebook – They didn’t have an exit plan. They built a huge company and solved really really important problems.”

“I think, we as founders, should actually focus on building stuff versus just building to sell and then it dies.”

“When I started, I didn’t start with a company in mind. I didn’t have a vision to solve big problems. I built something to solve my own problems. The first 5 years I couldn’t really see the point of this; the big picture. I think many great ideas are like that. You have to grow into it.”

“I don’t necessarily recommend my strategy, but maybe we are being constrained to think that we have too short of a timeline. I think maybe you have more time than you think. I think we should look on greater timelines, 10 or 20 years. What can we achieve in that time.”

When you start something, I don’t think you necessarily need to commit everything to it. You can start it on the side and see how it evolves. That’s at least how I started Todoist. This way I was never forced to give up or to try something else. – Amir Salihefendic

What this means to Amir:

“It’s some kind of balance act . . . don’t think you need to solve this problem in 3 months or 4 months. That’s very little time. You should think in long term.”

“I think we’re living in a great age where a lot of our stuff is unsolved. If you have a great idea and you really believe in it, you could make something amazing. You can do it not in 6 months, but 10 years.”