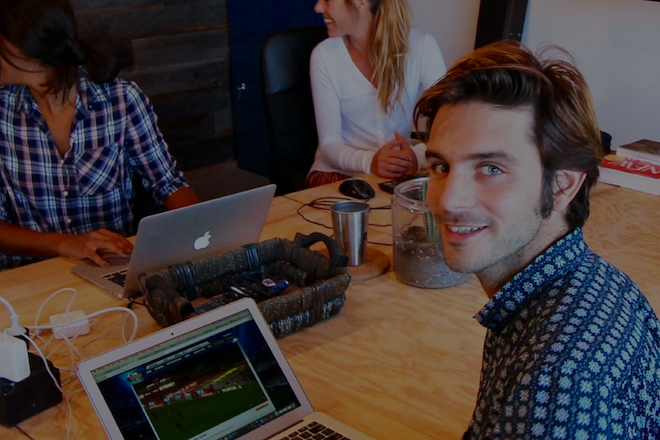 “I think we were just tired of working from home. We needed to gather in new places, helping each other with our business problems, and also I think understand that by sharing and collaborating together we can also become stronger.“

Segment 1: (Length :04:00) – General Updates; Introduction to Emmanuel Guisset and his journey as an entrepreneur; Coming up with the idea for Outsite.co

In Europe you grew up with the image of California, like the beach and the palm trees and all that good stuff and that wasn't really what I encountered in San Jose.

“To make things worse, just didn’t really have an office so basically was working from a coffee shop and then company didn’t have a lot of budget so I ended up staying in one of those, I don’t know if you’ve heard of that term, hacka houses.”

“Basically it’s like a single house filled with entrepreneurs and web developers and you pay like $1,000 to sleep in a dorm with like six other guys and if you’re lucky only two are going to snore.”

“That was my experience and I quickly realized that for the same price, I could actually have my own space in Santa Cruz, a coastal town like only 35 minutes from San Jose and by the beach so I did that.”

“I relocated to Santa Cruz and then I really got a feel of the California lifestyle because I was very much surfing and ocean and all that good stuff and I could really have a good lifestyle.”

“I would run on the beach in the morning then working and I was also trying a lot so it was basically like working remotely from my house, from my studio in Santa Cruz in between meetings and conferences and that was good.”

“I had a bunch of friends in San Francisco and I decided to move there. That’s where I started to discover the co-working concepts and I found that plenty of people are having the same lifestyle, working remotely, like entrepreneurs and remote workers. I really loved the spirits so I stayed in San Francisco for a couple of years.”

“I’m like you guys, not going to glorify money. It wasn’t an easy road, but it was one extreme from the other where I had this quarter million dollars worth of debt and my life was fine. We could live safely paycheck to paycheck, but we couldn’t do anything extravagant. I just, for whatever reason, wanted more for my family.”

“San Francisco was getting more and more expensive and that’s where I got the idea of merging a nice shared living space and a co-working community and I started the first Outsite two years ago in Santa Cruz.”

Segment 2: (Length :08:00) – Talking with Emmanuel Guisset; Testing the concept for Outsite.co; Initial hesitation from the market;

“Co-working environments are a shared office space with a strong spirit of collaboration.”

“It started with an entrepreneur, to which I think we were just tired of working from home. We needed to gather in new places, helping each other with our business problems, and also I think understand that by sharing and collaborating together we can also become stronger. We can make our businesses stronger.”

“I did a little bit of A/B testing. Basically, I created a fake profile of the house concept by the beach in Santa Cruz and I described the concept. Then I did the same on Craigslist and yeah, I saw quickly that there was demand.”

“There were people that said, “Oh I was actually looking for that,” and also I got some corporate feedback, like a team, so that they wanted to run the entire villa. After that I just needed to find that space, which actually wasn’t easy because at the time I didn’t really have one.”

“I was still foreign and I didn’t have a credit history so I found the house, which was like really exactly what I was looking for. A big luxury villa, one block from the beach, plenty of space to also have a separate workspace, and then I had to convince the owners. Of course they just didn’t really understand the concept and they were skeptical so they first said, ‘No.'”

“Those owners were about 50 something and they didn’t really get the trend. To be honest I really had to make them understand that it was for a professional and business travelers and people who are going to stay more long term and stuff and then they saw it was actually true and the space was very well maintained and stuff like that. Now they love us.”

Now what's happening is we have a lot of property owners, even like hotel owners coming to us and saying, 'Hey I want to turn my property into an Outsite.'

Segment 3: (Length :10:00) – Differentiating itself in the market; Property location types.

There's a big advantage that we have, comfort to like classic and where we screen the people. We want workers and business travelers.

“Most of the vacation rentals out there are actually to the general community and public in that it’s not as ideal for the property owner because you have those rowdy groups.”

“Those people that are just going to take the entire space and just do parties and stuff like that. That was an advantage to gaining those spaces.”

We just opened one in Venice Beach in L.A. actually. That was recent. We also opened one in Costa Rica which is actually a bigger property. That is already open for like company retreats and open it for individuals in February.

“Tahoe is like a winter thing last year but we actually, I’m not like 100% sure but I’m pretty confident we’re going to redo Tahoe from January or February.”

The world is a book and those who do not travel read only one page. – St. Agustine