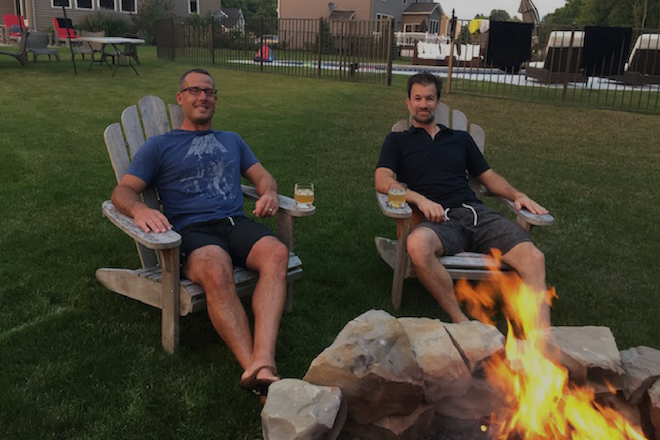 Segment 1: (Length :04:00) – General Updates; Introduction to Jason Bond & Jeff Bishop and their journey as entrepreneurs; Their evolution into trading; Forming a partnership.

I taught for 10 years in a New York state elementary school. I did what I was told. I was the first in my family to go to college.

“The guidance counselors in high school say, ‘If you want to be successful, you have to go to college.’ I came from a middle class family. I wanted more so I did what I thought was the answer there. Went to college, got my Bachelor’s degree, got my Master’s degree, got a job teaching. Married my wife, also an elementary school teacher.”

“After 10 years, I put our net worth into a spreadsheet, for the first time. I didn’t really even know what net worth was at the time. It came back -$250,000. It quickly hit me that I had no net worth.”

“I finally just said, “Enough is enough. I need to do something about this.” Just took action to make the change. I had no idea that it would take me to where I am today.”

“I’m like you guys, not going to glorify money. It wasn’t an easy road, but it was one extreme from the other where I had this quarter million dollars worth of debt and my life was fine. We could live safely paycheck to paycheck, but we couldn’t do anything extravagant. I just, for whatever reason, wanted more for my family.”

“Now, being just four or five years later, a multimillionaire, I still feel like the guy who had a quarter million dollars in debt because it all happened so fast, at least in my mind, it happened fast.”

“Man, the journey from point A to point B, it was hard. Quitting teaching? I was so scared to do that, it was unbelievable. People told me, ‘You’re going to fail. Why are you throwing it all away? How could you leave all this work?'”

“From that change, something really good happened here with my business. I couldn’t have done it without my business partner, Jeff Bishop.”

“Just like Jason, I started about 10 years ago on my side. Had a Master’s degree, had a Bachelor’s degree, Finance and Economics. Wasn’t really sure what I wanted to do. I paid my way through college, so I didn’t have a lot of debt at that point. I was pretty entrepreneurial along the way.”

“I had a lawn business, I had a bagel shop for a while, sold used cars out of my house here and there. Did a few things and they all failed. Nothing really worked for me. I had about 10 different jobs along the way that I ultimately ended up getting fired from all of them.”

I was a terrible employee and probably still am. I realized that that just wasn't going to be the route I was going to be able to go either.

“After my last business failed, I’d given up on the whole idea of ever having my own company. I’d been married about two or three years at that time. I said, ‘Honey, I think I’m just done with this. I’m just going to get a job and punch a paycheck. I just want to have it over with.'”

“I went down that route for a few months, ultimately got fired again. Didn’t have much choice in the matter. I got back into a little entrepreneurial venture here in the stock market. I finally found a thing that worked for me. I’ve always been interested in stocks. I was an amateur trader before that but I really gained a lot of knowledge in the last decade, trading full time.”

Segment 2: (Length :08:00) – Talking with Jason Bond & Jeff Bishop; Escaping the system; Going against the grain; Not being owned by the banks.

“The system, for me, after 10 years of being a school teacher, really felt heavy on me because I thought I was the best teacher of the teachers I worked with, of course.”

In the system, the way that public schools are designed, even if I'm the best, or I'm just working harder, out-performing my colleagues, there is no additional pay there. That really bothered me after 10 years. I could see myself doing a better job than some of my colleagues, but I wouldn't be rewarded for it, outside of the fact that I knew the kids were benefiting.

“Number two, I watched Dave Ramsey’s stuff at one point in time. He was on Fox Business and he always preached no debt. When I watched him talk about not having debt, I started to realize that the only person benefiting from me buying a house was the government or the banks. That’s why they give you the tax write-offs. That’s why the banks want you to take the mortgage.”

“I started to develop this feeling of, okay, the teaching system is great, but there’s no reward for outperforming my colleagues. My finances are all messed up, the bank is making a ton of money off of me on this mortgage, on all of these student loans, on these credit cards. I’m going to be paying them for the rest of my life.”

“I really just decided that I needed to buck the trend. That mentality of going against the grain, you always see the school of fish going one way and that one fish that turns around and goes the other way. People told me I was crazy for quitting teaching. People still tell me I’m crazy for paying for everything cash. I don’t do anything now unless I can pay for it cash.”

“I really felt that, after 10 years of being a teacher, I felt like there was an anchor wrapped around my ankles. It’s for those reasons that I decided that I need to go to a space where my performance is rewarded with money. I found Jeff and I started teaching people to trade stocks.”

Segment 3: (Length :10:00) – The value of building a business through transparency; Teaching via a community; Making the stock market approachable.

I was doing a roofing business during the summer. I was still a teacher. I would put roofs on houses. I thought, 'Man, this is really hard. I need to find something else.'

“Like you said, with the internet, tons of other people doing this. This isn’t anything new. I thought, ‘I can probably do this better than most people.’ I can learn this skill. I have a Master’s in Education, so I know how to learn something and then teach it to others.”

“A lot of people lose money trading stocks, so there’s a huge market there. We all know that. I really didn’t care to trade, when I was a teacher. I got into it because I was looking for easier ways to make money than putting roofs on houses.”

What's really exciting about my service is, it's not fluff because I stream my E-trade account live to my clients daily. They can see the wins and the losses. I lose like everybody else, I just happen to be really good at it now and I win a lot more than most.

“The reason the business took off is because we’re so transparent. I could tell you, ‘Hey, I turned $100,000 into half a million dollars this year,’ and you might say, ‘Well, was that with paper money or did he really do it?’ When you show people it live, they can see your account, they can see it, then it just takes on a life of its own.”

“I think the community is the reason why the whole business exists, at this point. People that are intimidated by the stock market, I think, they come and find Jason. They see that he’s personable, he’s a real guy, he was a teacher, did roofing, did all these real things that people can relate to.”

“Here he is, just a few years later, he’s making hundreds of thousands of dollars a year in his trading. He’s teaching thousands and thousands of people what he’s learned and how he applies it. The beauty there is that it’s not a very complicated thing. He just takes these three simple patterns that he’s really mastered and does well, and he does them over, and over, and over. It just works.”

“It’s not like you have to study thousands of hours of material, or have an advanced degree in finance or whatever. Everybody can do this kind of thing if they just can overcome the hesitancy of getting into the markets. Very intimidating, at first, but Jason makes it really approachable.”

Risk comes from not knowing what you’re doing. – Warren Buffett