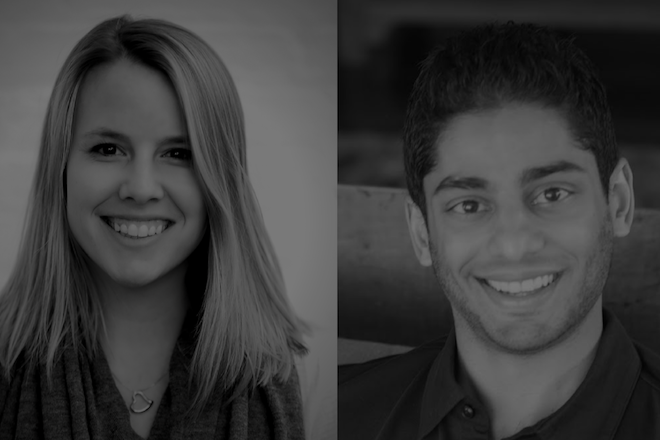 “The more we please people, they end up buying more, and when they buy more we end up winning the contest. At the end of the day, marketing is not just how do we go acquire users, but how are we telling our narrative to users on our own website..“

Segment 1: (Length :04:00) – General Updates; Introduction to Nevin Shetty & Lizzy Ellingson and their journey as entrepreneurs; A chance meeting between the two; turning an idea and problem into a solution; starting Blueprint Registry

“My whole career has been in finance and accounting. I started at PWC in New York then worked at a few alternative investment funds. My whole mandate there was how do you scale businesses from a billion to two billion dollars? How do you improve efficiencies across processes, across human resources, and across strategy? There’s a better way to do everything.”

“In 2013 I was outfitting my apartment in New York and realizing buying furniture online was a terrible process. That was the catalyst for the idea. Can you build an eCommerce experience that’s based on the blueprint or layout of the home? That was the big idea, but interestingly enough, I am a finance guy, I’m a business guy, I didn’t know where to start.”

“I had met Lizzy during Hurricane Sandy in 2012 in New York. I lived downtown in New York. I was out of power. I asked my friend where he was going, and he was like, ‘Hey, I’m going to a friend. She’s actually from Seattle as well. You should come up. She’ll definitely host you.'”

“I was one of 15 people who ended up staying at Lizzy’s apartment in uptown New York. That’s where we initially met. Then four months later when I had the idea, I’m like, ‘Hey, Lizzy, do you want to go for coffee? I’ve got this idea. Let me know what you think.’ That’s how it started.”

Ever since we met, that was the conception of the idea, and then we're like, How do we apply this to something real life?

“Like Nevin said, we met at Hurricane Sandy, which was crazy. I hosted around 15 people, Nevin being one of them. When he came to me with this idea of a blueprint, I thought it was really interesting, but it actually really applied to what I was going through in my personal life.”

“I had recently been engaged and my fiance, now husband, were trying to register in New York. We knew we were going to move back to Seattle, and we didn’t quite know how we’d outfit our home. We ended up returning 50 percent of our gifts, and it was a really frustrating process.”

I thought the visual reference of the blueprint could really apply well into the wedding registry market. That's really where we wanted to test the idea, and that's really the catalyst of where Blueprint started.

“What Blueprint is today, if you look at the wedding registry market, many people get engaged. They have a registry. They usually go to a big box retailer, in-store, use the gun, but more and more people are now realizing that’s not a very good experience.”

“They don’t actually get what they want, and they end up returning a lot. The numbers show on average users have three registries, so at multiple different places, and they have to manage three places or guests have to go to three places. It’s kind of a bad process, and it doesn’t really help you know what you need, want, and desire for a new life together with your partner.”

“What Blueprint does is a couple different things. We are kind of eCommerce based on the layout of your home, so you have a visual top-down layout of your room, and you click through the rooms and the different visualizations. If you click ‘couch’, you filter for all couches visually.”

“Then we aggregate products from multiple different retailers, so Williams-Sonoma, West Elm, Pottery Barn, Amazon, Target, you name it. Instead of a user going to multiple different stores, they can get it in one place. We offer this kind of really unique visual experience coupled with this really convenient access. That’s kind of where we are today, and that’s a really short way to say what we do.”

Getting here has been a two-and-a-half year journey. If Lizzy and I look at it today, it's another five years probably ahead of us. You talk about hustle and stamina, we never thought it would be this hard, but we can't tell you how exciting and how fruitful it's been for us, both professionally and personally.

“Lizzy and I had both started businesses in our respective fields. Lizzy essentially started this really impressive creative design consulting service. I had started an asset management firm. Starting a tech company is a totally different beast, and that’s for two different reasons.”

“One is we are a software and data business, and ultimately we need to essentially develop on the website.”

Lizzy and I don't know code, so we're non-technical founders. That's been a really big challenge for us since day one. You don't speak the language, and we've had to rely on other people.

“We’re essentially interpreting another person in terms of building our vision and our ideas and our strategy. That’s been one big constant hurdle. As you probably hear from many other people who are on the podcast, and as people know, development is a hard thing and there’s not that many developers out there.”

“There’s a supply and demand issue. Finding good developers at a reasonable rate is really hard to do. That’s always been a struggle. We’re always behind on development, but it’s something we’re always striving for.”

“Then two, something we’ll get to later, is fundraising. Lizzy and I bootstrapped it since day one. We worked out of my apartment in New York for a year. We work remotely. Raising capital was very, very difficult.”

“So one is the development and two is the fundraising.”

“When we first started, this was all organic, and then when we took a first Angel Investment, we wanted to really test ads and try it on different platforms. What’s really historically worked the best for us is social media. So Pinterest, Facebook, those are our top performing ad platforms in which we acquire users.”

The one thing, too, is that marketing is a constant moving target. One thing that worked in Pinterest six months ago isn't working now, and that's because they're constantly rolling out new features, new updates. They're trying to make their platform more robust so it works with small companies like ourselves to large companies like Pepsi, Coca-Cola, that have huge budgets, and so really playing with that.

“The other kind of hard part is budget. We have such smaller budgets, and how do we work on the same scale as these larger players. Something we’ve found is Q4 is not necessarily a scrap, but people are really pushing their budgets come December and so how do we kind of play in that space.”

“Really trying to get creative with it and not necessarily stopping our marketing spend on all these social media platforms, but reallocating it toward areas that are a little bit more gorilla, where we can get on platforms and areas where we can be noticed for our right demographic. Beyond that, we’ve had a great growth organically. We’ve grown around 25 percent, 30 percent organically since the beginning, and we’re pretty excited about that.”

So there's two points on the fundraising. One is a macro and one is a micro level.

“On a macro level, if you look at the investing environment in VCs, most VCs made allocations to eCommerce 2011 to 2013, 2014. We started raising the end of 2014. When you go to these VCs, they’ve usually made their allocations, or they’ve already been burned on their bets.”

“A lot of eCommerce didn’t play out. From a macro environment it wasn’t the best time to raise for eCommerce, and if you really look at VC investing, it’s very sector specific at a given time. So for a little bit it was all machine learning, and then it was all conversational commerce. There’s a lot of different things involved. That was one issue we generally faced.”

It's a lot to do. It's always been a struggle. It's funny, us as entrepreneurs now, we realize information in the press is obviously asymmetric, so you always hear about founders or companies that raise $10 million dollar, $100 million dollar rounds, but for the vast majority of entrepreneurs, raising capital is really difficult and most companies don't do it or don't raise really large rounds.

“I think one thing to point out, too, that Nevin alluded to is the time issue. When we first started, we’d go to every single meeting together, and what we found is that our business actually was hurting from that. So how do you break up those roles?”

“This last round, which we just closed, we broke it into Nevin really focused on fundraising and spent about a month fostering these relationships, getting people in the door, where I kind of led the helm when it came to the business and making sure the product was up to speed, making sure we were hitting development milestones.”

“Over the course of three years we found that our products lived and breathed through our users and through data. How do we read that data? How do we read through the noise of consumer feedback and figure out what we need to push next? So that’s working with our customer support, which at the end of the day we’re a customer support business just as much as we are a registry business. How do we listen to those consumers.”

“The thing with us is that we have two different types of consumer. We have a guest that comes and buys gifts, and then we have a couple or an individual that creates an event, whether it be a wedding registry right now or down the line when we move to baby registry, dorm registry, etc., we have constantly two different user groups. How do we please both sides? It’s been a really interesting roadmap in just trying to clearly develop the product in the right way for both sides of the coin.”

Marketing is a contest for pleasing people. - Seth Godin