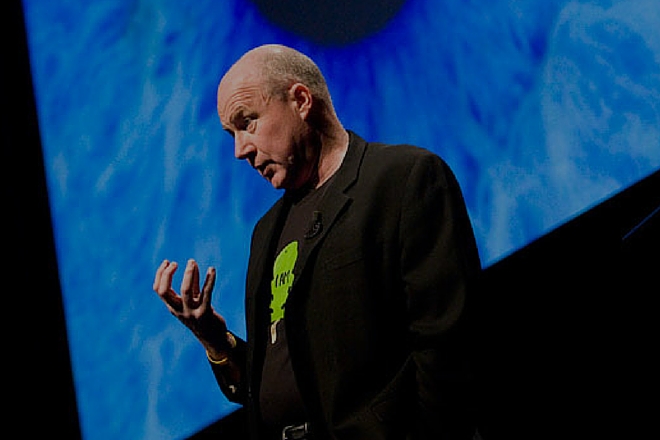 Segment 1: (Length :04:00) – General Updates; Introduction to Kevin Roberts and his journey as an leader thus far; His background in being one of the world’s leading experts in branding; Getting started; Observations of Millennials

“If you’re a youngster out there and you’re striving and you’ve got an idea and you want to get started, it’s daunting. And of course it is. It takes bravery, courage and all of that stuff.”

“The first thing that strikes me is that you’ve got to kick off every morning by reciting your ABC’s. It worked when you were 5 and it works now. Your ABC’s stand for ambition, belief and courage.”

“You’ve got to have that ambition cause in this crazy world it’s an awesome thing because we live in the age of ideas and ideas are completely there for you. If you’ve got an idea, it doesn’t matter where you are, who you are, what your education is, who you know, none of that matters any more in this connected, collaborative and creative world.”

“Start with an ambition. Articulate it. Spell it out. Make it a dream. Have the belief that it’s going to happen and then have the courage every day to face the abominable ‘no man’ and all the people who are trying to kill your idea.”

“These Millennials get a bad bad rap. I simply don’t believe that. The average age of people at Saatchi is 27. That’s the average age. We have turnover of 27% per annum so we have this magic 27 number. It’s just filled with vibrant, idealistic, purpose driven, very connected people and it’s never been more exciting than these people.”

“They (Millennials) learn so fast. They learn faster than we’ve ever learned. We believe in giving them four foundations: Responsibility, Learning, Recognition & Joy.”

“And if you give these Millennials these four things,

“Millennials just have different work habits. They’re not just going to sit in a stupid desk, stupid office, going to stupid meetings talking about stupid bureaucracies and hierarchy. They don’t do that. These guys work 24 by 7. They’re work and their life is integrated. They never switch off.”

“They dress differently, act differently and want different things. They have a different rhythm, but they’re in touch with the market, the street, the consumers. And these guys are going to be the leaders of tomorrow.”

“When I wrote this book, 64 Shots, it really is sort of designed for these young people who’ve never really been coached in leadership and they’ve been led to believe that you’re either born a leader or not, which is the biggest load of rubbish I’ve ever heard.”

“They’re both just vocabulary labels that don’t help anybody. Intrapreneur, entrepreneur, outrepreneur, uptrepreneur, who cares – I’m interested in people who make things happen. I don’t care if it’s inside or outside. I don’t care about people who get things done. That’s not good enough. Will you make things happen? Will you make them happen with me? You don’t have to make them happen for me anymore.

“If you don’t keep up with them, they’ll just go and find another challenge. They just want to grow.”

“There is still a blind culture and a fear of failure and it starts with our education system and goes right into many of our institutions.”

Segment 3: (Length :04:00) – Interviewing Millennials for Saatchi & Saatchi; Become a Story Sharer; Brands that get it.

“We’re looking for people who are driven by ideas and driven by creativity, but who believe in playing with a team; who want to belong to something, whether that’s family, a tribe, a community. We don’t really do interviewing per se. We have a 1 page purpose statement that’s about things we believe in.”

“We believe in the reasonable power of creativity. So we ask the kids to demonstrate that.”

“Building a brand is no longer important. What’s important is to create a movement.”

‘The attraction economy has moved through the information age and moved through the attention economy, and now we’re living in an economy where we’ve got to emotionally engage and attract people, not to our brands, but to the purpose of the brand. We have to attract them to become our advocates.”

“I’ve been Apple since the get go. They inspire me. They make me feel involved.”

“To me, one of the greatest disrupts of our time has been Amazon. I don’t remember the last time I went into a store. Why would I bother. This guy’s got a simple strategy. We’re going to offer you the widest possible range at the lowest possible price, today.”

“I think some of the things that Facebook is doing around the whole video thing as well as SnapChat sharing . . . the things that are being done to connect the world and to make connectivity a human right is inspiring to me.”

“Ideas are the currency of the future”