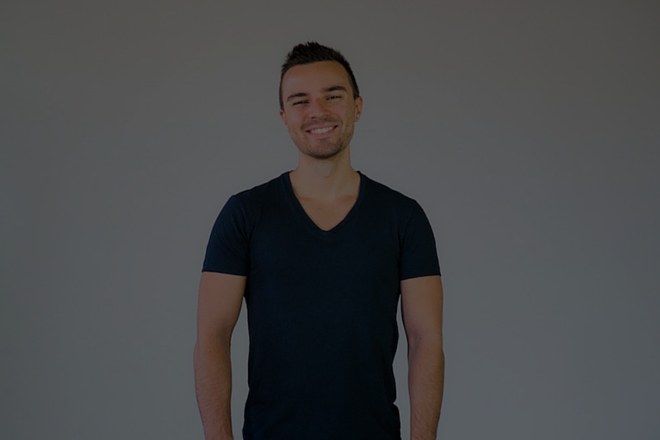 Segment 1: (Length :04:00) – General Updates; Introduction to Christopher Gimmer and his journey as an entrepreneur thus far; Co-Founding Snappa.io; Breaking from the norm; Falling into Entrepreneurship as a result of a life realization.

“I had a really the really good job, a stable pension, you know, what our parents generation kind of would have dreamed of, but at 25 or 26 years old when you start looking towards retirement, that’s just awful.”

“A lot of people in my office had calendars where they were writing 20 years until they can retire and I thought this was just nonsense; to wish 20 years of your life to pass by. That’s when I really started to see that I can’t be doing this for the next 20 years.”

“There’s a lot of opportunity online and I started thinking about what that does in terms of freedom and started adding a little more passion to my life.”

“We just started doing things on the side while we were still working full time. Once we were making enough money to feed ourselves and put a roof over our head, I kind of jumped ship and haven’t looked back since.

Segment 2: (Length :04:00) – Talking with Christopher Gimmer; Transitioning from a Full-Time Job to Becoming an Entrepreneur

“I was never really that entrepreneurial type but for me, above all, I just wanted more freedom and to work on things that I was a little more passionate about.”

“I hate that I had to wait 11 months before I could escape the cubicle (to take my vacation).”

“Essentially I just learned everything I could. I read tons of blog posts. I listened to tons of podcasts. I read a shit ton of books. I tried to absorb as much information and knowledge and that really helped me because I literally knew nothing.”

“The problem that a lot of people run into is that they read a ton of stuff but then they don’t take action and they don’t learn.”

“One technique that one guy did may not work for your business so you need to realize that not everything is going to work for you. That’s where trial and error come into play.”

“The first thing we did was a student dating website. There were a lot of things we learned. We didn’t validate the market in any way. I didn’t talk to any students to see if it’s something they actually wanted. We overbuilt it over four months, but we learned a lot. So, we took that into the next project.”

“Build anything. You just have to start somewhere.”

“The way I look at it is it’s really only a failure if you’re not going to learn from it.“

“The problem is if you just keep failing and you never learn anything and never adjust anything, then that’s awful. There’s no point of failing for the sake of failing.”

“Every business that we’ve started, we’ve leveled up in a sense that we learned so much from doing the first thing that we parlayed that into the second thing and we made less mistakes.”

“As long as you’re continuing to level up and keep learning, then there’s nothing wrong with failing.

Segment 4: (Length :05:00) – Setting goals for yourself; Rebounding from mistakes; Self-Funding and Bootstrapping; Freedom

“We’ve bootstrapped everything. With Snappa, this was the first company where we had enough money to hire staff and stuff like that. When you talk about reinvestment, the first thing that we were excited by was the ability to hire a rockstar developer. We weren’t just upping our salaries.“

“You have to sit down and say to yourself, if you really want to grow a great company and build a great product, then paying yourself $200K per year and having no staff is not really going to be a wise idea.”

“So we invest our profits back into the business, hire people that can help us scale and that’s very different than venture capital where someone will dump $1M in your lap and you’ve got a great office and you can pay yourself a lot more money but there’s pros and cons to both approaches. Bootstrapping has given us more freedom.”

‘We can take a bit more time and build things the way we want. It’s a bit slower but there’s no doubt about it.”

“When I talk about freedom is number one, being able to work wherever I want . . . The freedom to travel for me is a huge thing. I love traveling and being able to meet new people.”

“Number 2, the freedom to work on what you want. When it comes to investment, you’re going to be asked to push it to the limit and a big big company. Not everyone is going to want to do that. There’s a cap to your freedom.”

“Investors want a big return. Most of these guys are willing to invest in 100 companies just for 5 of them to give a huge return. If you grow your business and you’re turning out a million bucks a year and you’re a small team, most people would be super pumped with that. But if you’re generating a million bucks per year and you’re a VC (Venture Capital) backed company, you’re considered a failure. You have to be doing a lot more than that.”

“If someone dropped a million dollars on my lap right now, I wouldn’t necessarily know how to deploy that money. I think that’s really important right? If you’re going to take money, you better have a really good plan for what you’re going to do with it and make sure that you can turn that million into ten million. Otherwise, don’t do it.”

“Bootstrapping allows you total creative freedom. For example, if you decide to approach your business in a certain way that makes it a two- or three-year process to get to your first product, you can do that, versus being rushed into it by investors.”