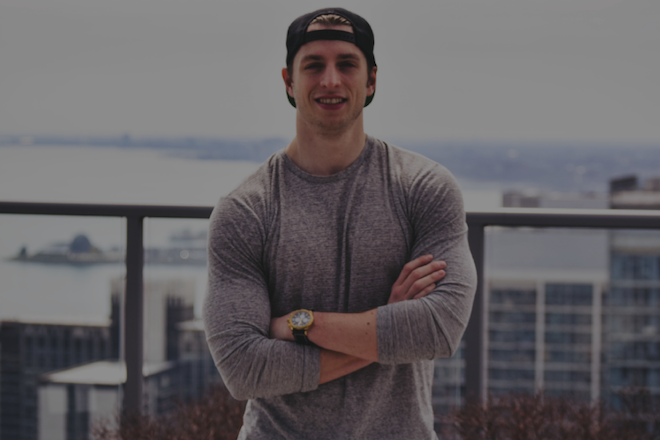 “I’ll take certain nights off but I’ll still get the minimum done to progress that goal, but it’s all a matter of priorities. You have to cut the crap out if you want to develop something else and just use your time wisely..”

Case Kenny – Founder of PRSUIT.com; Learning from his 9-to-5; Transparency in media; Side Hustle; Finding balance; Sticking to your vision; Mindset; Critical mass media distribution.

Segment 1: (Length :04:00) – General Updates; Introduction to Case Kenny and his journey as an entrepreneur; Creating PRSUIT; Learning from his 9-to-5; Transparency in media.

I graduated in 2011, moved to Chicago, was kind of all over the place. I majored in languages. Like I speak Chinese and Arabic and Hindu. I was always good at that kind of thing. So naturally I went into advertising, right, in America. It was a bit of an odd choice.

“So I started in Chicago working at a couple ad agencies which was really rewarding from a learning standpoint. I learned a lot really quickly. I had a lot of great exposure very quickly.”

“You know, I was quick to understand the ecosystem and really kind of what made everything tick and you know it was at that time I worked with a lot of different brands and I was … my mandate was to help them connect with millennials, like my folks, right, my squad.”

“Really it was about that experience of working with different publishers and different media companies and different influencers. It was ‘all right, Case, go find these people who create content that speaks to you and inspires you and that motivates you to do cool stuff.'”

“Through that experience I really found that no one was really doing it in a way that really spoke to me. I was like I can’t be alone in this. And talking to all my friends it was kind of a joke.”

Like no hate towards BuzzFeed or any of those types of companies but it didn't inspire me. It was entertainment source. It didn't do anything intrinsically like from a substantive aspect of really wanting to make me want to do anything.

“So as a creative outlet I started Pursuit just by starting to syndicate and republish articles from some bloggers that I liked online and started to just get these folks to write for me, to republish articles on my blog, on Pursuit and just go from there.”

“But the idea was if I am a millennial, if I’m a young aspirational person who wants to get the most out of life, who wants to get all these different perspectives, I want to know what transpired in your life that you’re offering me?”

Millions and millions of people consume the content and read it and from a social following and email list and i think that's just because I love transparency and I know you do too. We talk about the journey.

“So that was like three years ago and it certainly was a slow start. You talk about the theme of learning as you go, I didn’t know anything at that time. Everything was literally learning on the fly.”

“But I will say doing it as a, quote, side hustle, was the best thing I could ever do because it was so closely aligned with what I was doing during my 9 to 5 that the learning gap was decreased from what could potentially be years to months.”

During the day, for eight, nine, ten, 12 hours a day I was learning the ropes of what it takes to create distribution, social media, marketing, digital advertising, all this great stuff and then at night applying to my own thing.

“So not only was it rewarding on the intrinsic side from everything I just mentioned about transparency but then just like tactically I was equipped to do it. And obviously, it’s been a very evolving process but that was three years ago.”

Segment 2: (Length :08:00) – Talking with Case Kenny; Working in your job with your passions; Art of the side hustle; Finding balance.

I will say, to be honest, I think I kind of fell into a perfect scenario, you know, having come out of college and not really knowing what I wanted. I fell into something I was interested in and it just blossomed into a passion and then the side hustle evolved from there.

“So for me, you know, I’m very fortunate to have a scenario where my skills during the day amplify at night and vice versa.”

“But I mean I talk to people all the time who are working, you know, in very intense corporate financing during the day or audit and then at night they’re an artist. Or at night they’re a rapper. Like diametrically opposed ideas where there really is no opportunity to translate skills.”

I would say if you are young, you're young in your 20s or 30s I still think there is plenty of opportunity if you're not ready to dive into your side hustle full time. You can move jobs. I quit two jobs to get to where I am now where it's like the perfect scenario.

“I went from an ad agency doing creative type strategy services and now I’m in full time tech sales and that aligns so much more with what you are I are doing with Trep from a business development standpoint where if I was still at the agency I don’t think I would have that skill set.”

“So I mean I purposefully moved and uprooted aspects of my life to more align with what I knew I wanted to evolve on my side hustle.”

“Certainly I think if you’re serious about it and you’re serious about developing your side hustle and eventually evolving into a full time hustle then you need to make some moves and whether that’s a big move like totally switching agencies or you know industries, whether it’s a small move like internally moving to a different department that’s more aligned or something like that, I’d certainly recommend that..”

I mean I've been publishing one article every day for three years. I mean like it's just part of my life. I don't see any other way around it.

“I think if you truly have that why that is so palpable and burning then there’s no … you’re not going to go home and watch Netflix instead of doing your side hustle. Like it’s just not a … it won’t click in your brain. You won’t be able to do it.”

“I’ll take certain nights off but I’ll still get the minimum done to progress that goal, but it’s all a matter of priorities. You have to cut the crap out if you want to develop something else and just use your time wisely.”

“I am very fortunate to be in the position I am at my 9 to 5 but I still find time during the day to do things for the side hustle whether it’s walking to get lunch or over lunch or texting on the way to the bathroom.”

“Maybe if you take the bus to your apartment, do it on the bus, in an Uber, like it’s just all about making opportunities and I feel like it’s not that tough if you really put your head to it.”

Segment 3: (Length :10:00) – Setting mastery goals versus performance goals; Sticking to the vision; Creating a media empire with massive distribution; Surrounding yourself with positivity.

“Like I get down on myself all the time but I think it comes back to this idea, and I’ve written about it before, this idea of setting goals in a way that allows you to progress that journey. So there is a difference between setting mastery goals and performance goals, right?”

“Compare that to like a mastery goal which is yeah, I want to get to that metric but I want to do so by mastering distribution on social media or I want to get there by converting visitors to an email list. Like those are like skill set goals versus metric based goals.”

“And I think if you can really wrap your head around setting the latter type of goals, mastery goals, you won’t get down on yourself as much. And I think that’s really important. We talk about it all the time, the idea that one is greater than zero. Just one little thing. And I think if you can focus on progressing yourself towards a skill set rather than a number it’s going to help you progress further and I think certainly so.”

I know it's cliché to say but having the vision, like for me, when I sit down and I'm working I'm in the weeds. I'm in a Google analytics or HTML on my site, I'm writing articles. I'm boots on the ground type stuff, but the large vision is I know this will pay off in another two years or another year or another five years where I will have 100 million people visiting my site and our properties and I know what that can mean from a revenue standpoint, from a biz def standpoint. I know what that means.

“It’s not easy though. I get down all the time. It’s such an up and down game. But I think if you focus on mastering the skills rather than I just want to get to this number this week.”

“So I think if you focus on just remarking on what happened this week that is an opportunity for development for a skill or gratitude. We talk about it all the time. If every week you’re thinking about the good things that happened that enabled you to progress the next week I think that really helps you. It certainly keeps you humble for sure and also it helps you keep going.”

I am such an optimist. Like everyone at my 9 to 5 makes fun of me. They're like how did that meeting to and I'm like we're going to close it. We got it in the bag. Six figures. Don't worry about it. It's done. And they're like all right, Case. Four months later though, it's done.

“It’s easy to always be looking towards your next finish line that you’re continuing to move, but like always just focus on the good things that have happened. Like I could rattle off a bunch of good things that happened this week that are small, that might not be tangible, but that are going to move that journey.”

My biggest frustration is lack of growth so, for me, this realization was a significant catalyst for change. It struck a chord deep down inside of me because I equate lack of self-growth with the potential for future regret... and I am terrified of regret. So, whatever it is in your life that motivates you to improve, think of that when considering doing or not doing something and reflect on the way it affects you. - Case Kenny